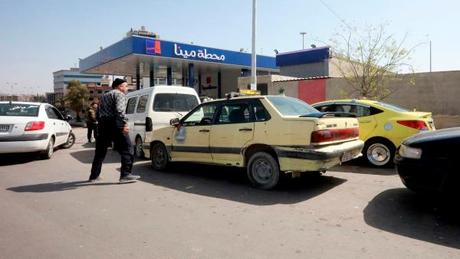 Syria's oil minister claimed the severe fuel crisis that has hit his country is the result of Western sanctions, and also allegedly because oil fields in eastern regions have fallen under control of American troops and U.S.-backed Syrian Kurdish fighters.

The minister, Bassam Tomeh told state TV in an interview aired late Wednesday that oil supplies have been delayed because of the situation. "We have stocks that we are trying to manage in a rational way," he said, without elaborating.

U.S. sanctions on Iran have compounded the fuel crisis faced by the government of Syrian President Bashar Assad. Tehran is a key Damascus ally that has supplied it with crude oil throughout Syria's nine-year civil war.

Separately, oil smuggling into Syria from neighboring Lebanon has dropped recently amid tight measures by Beirut authorities as Lebanon has been gripped by its worst economic and financial crisis in decades.

"American sanctions are depriving us of importing (enough for) our oil needs," Tomeh said.

In government-controlled regions of Syria, people spend hours waiting in line to fill up their tanks. The cost of 20 liters (5.2 gallons) of gasoline is now 25,000 Syrian pounds ($11) on the black market while the subsidized price at gas stations is 5,000 Syrian pounds ($2.3).

Most Syrians make less than $100 a month, which leaves them unable to afford black market prices. The government is also struggling to fight fraud and corruption in fuel distribution, according to Tomeh.

"Everyone knows that our oil fields that used to supply our fuel needs are under American occupation," Tomeh said.

Tomeh promised the "crisis is about to end" and urged Syrians to be patient. "The war is not over and the economic war is at its most intense now," he said.

Trump is reminding the Syrian public that it needs to rally around Assad to defend the country: these new armored cars in the northeast are just to make that point more clearly.