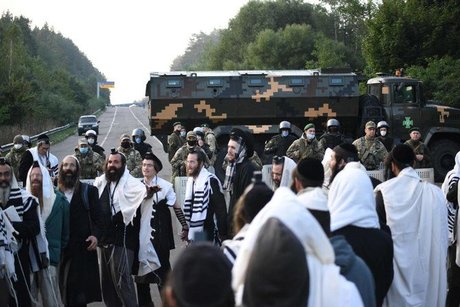 Around 1,000  Hasidic Jews were massed on Ukraine's border Thursday, with some vowing to stay, even though Kiev refused their entry citing coronavirus restrictions and Israel urged them to return.

Tens of thousands of Hasidic Jews travel to the central Ukrainian city of Uman every Jewish New Year -- which falls on September 18-20 this year -- to visit the tomb of Rabbi Nahman, the founder of the Breslov Hasidic movement.

The mainly American, French and Israeli believers departed for Uman this year even though both the Ukrainian and Israeli governments last month urged them not to travel because of the pandemic.

Kiev has closed its borders for most of the month of September but the pilgrims attempted to bypass the restrictions by travelling through Belarus.

Speaking to AFP from the Ukrainian-Belarusian border, one of ultra-Orthodox pilgrims, Itsik Cohen, said the believers were hoping for divine intervention.

"I'm waiting and praying that they open the borders, so we can have the privilege of being with our Rabbi, God willing," said Cohen, an Israeli Breslov Hassid from Jerusalem.

"We believe in God, and if God wants it this way, we need to do anything we can to show our determination, to the very last minute."

Ukrainian authorities said the situation had not changed since Monday when crowds of believers began building up on the closed Ukraine border and pilgrims were still refusing to leave.

A video released by Ukraine's border guards on Thursday showed tents and sleeping bags on the roadside along with piles of garbage.

"They are dancing, they are singing, they are praying," the spokesman for the Ukrainian border guard service, Andriy Demchenko, told AFP.

He said that some 1,000 pilgrims had reached the no-man's land at several border crossings, while the total number of believers in Belarus hoping to cross was closer to 2,000.

Ultra-Orthodox members of the Israeli coalition had pressed Prime Minister Benjamin Netanyahu to enable the tradition, despite the objection of health officials who feared the crowded mass event would increase contagion.

But an Israeli minister indicated Thursday that efforts to enable ultra-Orthodox believers' access to Uman had failed.

"Ukraine announced it wouldn't allow entry via border crossings or any form of small delegation," Higher Education and Water Minister Zeev Elkin, who is Ukrainian-born, said on Twitter.

"I call on our citizens to return to Israel and uphold the quarantine instructions upon their arrival."

Moshe Garcin, a 44-year-old pilgrim who arrived in Uman days before Ukraine closed its borders, told AFP that "it's not for them (Israel government) to say this".

"Elkin doesn't determine the reality, there's a God in the world," he said.

Both Ukraine and Israel are keen to avoid a spike in coronavirus infections, with Kiev closing the borders to foreigners until late September.

Israel is set to be the first developed country to enforce a second nationwide shutdown, to begin on Friday afternoon.

The Belarus border guard service said 1,216 people had attempted to cross since Monday, including 337 children.

The pilgrims' standoff on the border has led to diplomatic tensions between Ukraine and Belarus.

Ukrainian authorities on Wednesday accused Belarus of giving them false hope of entering despite the restrictions by spreading "rumors" that the Ukrainian border may still be open to foreigners.

Minsk has called on Kiev to open dialogue with the pilgrims and show respect for their rights.

"The Red Cross came and gave us water, hot water and cold water and tea, and provided medical care to whoever needed it," pilgrim Cohen said.

Meanwhile, up to 3,000 Hasidic Jews have arrived in Uman for the celebrations, local police said. Law enforcement has tightened security near Rabbi Nachman's tomb where pilgrims have congregated.

Ukraine has reported more than 166,000 cases of coronavirus and 3,400 fatalities.