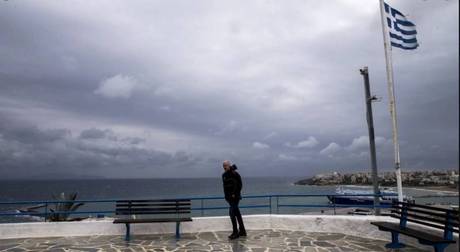 The storm was expected to head south after hitting the Peleponnese late Friday, hitting the Athens area, in a degraded state, overnight.

Mediterranean cyclone Ianos, an unusual phenomenon also known as a "medicane", packed violent winds of up to 117 kilometers (73 miles) per hour according to the Greek civil protection agency.

The coastguard on Friday said a boat believed to be carrying 55 migrants was in distress off the western Peloponnese amid the gale-force winds.

"For the time being we are unable to send a vessel to help," a coastguard spokeswoman told AFP.

Other boats in the area were approaching the migrant vessels to offer assistance, she added later.

Minister Hardalias said there were no reports of injuries so far, adding that forecasts see the cyclone shifting southwards later Friday.

The islands of Cephalonia, Ithaki and Zakynthos have been hit with power outages and part of the local road network has been cut off, he said.

Smaller problems were reported on the islands of Corfu and Lefkada.

Two Ryanair flights to the Ionian island of Cephalonia were earlier unable to land at the local airport and were rerouted to Athens.

The migration ministry on Friday said over 800 asylum-seekers from three camps near Athens would be relocated as a precaution.

The 778 migrants from the camps of Elaionas, Malakasa and Schisto would be moved to a conference hall in Athens. Another 28 minors from the camp of Skaramangas would be temporarily rehoused in a hotel, it said.

"We have another 36 hours of intense conditions ahead of us," Kostas Lagouvardos, research director at the national observatory of Athens, told state TV ERT.

A Swiss sailing boat moored at the island of Ithaki was carried away by waves but its two passengers managed to make it to shore, state news agency ANA said.

Another boat sank at the harbor of Zakynthos but its Belgian occupants were unhurt, Kratsa said.

The civil protection agency has urged those in the storm's path to refrain from non-essential travel and avoid basements, due to the flooding.

"Cyclones and incidents like this are relatively rare in the region, as the Mediterranean sea is not as wide as the Atlantic and the climate is not favoring them," said Efthymios Lekkas, professor of applied geology at the University of Athens.

“However, in the last three years, from 2017, three cyclones took place, a significantly faster pace than before. We are very concerned whether this is due to the climate change," he added.

Cyclone Ianos "looks like it is going to be eventually milder than anticipated, but it is still ongoing," Lekkas said.

"It will reach Attica from midnight Friday, but will be considerably degraded,” he added.

On Thursday the agency said it had relocated rescue teams with tracked vehicles to high-risk areas and held three rescue helicopters on standby.

A medicane hit Greece in September 2018, killing two people on the island of Evia.

In 2017, flash floods west of Athens left over 20 people dead in one of Greece's worst natural disasters.