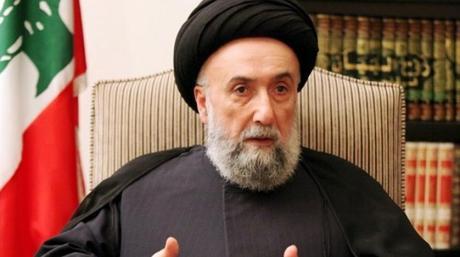 A hearing session kicked off at Mount Lebanon's Justice Palace to question anti-Hizbullah Shiite scholar Ali al-Amin over accusations of "meeting Israeli officials” during a conference in Bahrain.

In June, a lawsuit was filed by the public prosecutor’s office in Mount Lebanon against al-Amin for “meeting Israeli officials” and a host of other charges during a conference he attended last year.

The accusations also include “attacks on the Resistance and its martyrs, inciting strife between sects, sowing discord and sedition, and violating the Sharia laws of the Jaafari sect.”

Besides Israel, the 2019 dialogue conference among religions in Bahrain was attended by religious clerics from different countries including Kuwait, Lebanon, Egypt and Jordan.

Al-Amin had assured there was no personal meeting with any Jewish people who attended the conference, and that he “was not aware of their attendance.”

Al-Mustaqbal Movement leader ex-PM Saad Hariri had described the move against al-Amin as “a blatant attack on the dignity of the Lebanese.”

Its the only way Hezbollah can silence this brave and courageous Lebanese Shiite scholar. Very dirty, coming on top of the latest news about corruption, money laundering, drug-operations as well as terror preparations all over Europe.

I guess their God only created shia3 and no jews or Christians etc...?
What a joke they have become in an age of information and knowledge they return to the stone age....where they belong.

Shia are not Muslim!

It was at a world forum where all religions from all countries were represented. Obviously one can only bump into a representative of an «enemy» country. I’d like to remind everyone that LAF officers often talk with Israeli officiers , yet nothing ever happens to them. I saw photos of Michel Aoun shaking hands with Ariel Sharon, the butcher of Beirut.... he got promoted to the rank of president for this.

As for Hizbala being a resistance, that’s a lie, it’s only a resistance for some Shia and as few losers other sects. Everybody else considers it as a terrorist organization that should be hunted down.