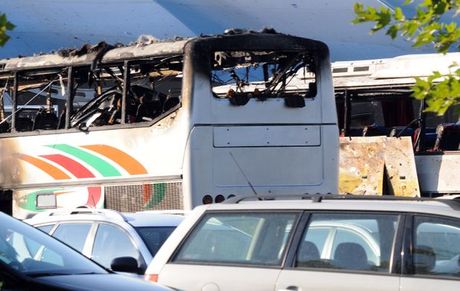 A Bulgarian court on Monday sentenced two men to life in prison over a deadly 2012 bus bomb attack on Israeli tourists at the country's Burgas airport blamed on Hizbullah.

The attack in July 2012 killed five Israelis including a pregnant woman, their Bulgarian bus driver and the Franco-Lebanese who carried the explosive, and left over 35 people injured.

It was the deadliest against Israelis abroad since 2004.

Bulgarian and Israeli authorities blamed the bombing on the Lebanese Shiite movement Hizbullah, playing a part in a subsequent European Union decision to blacklist Hizbullah's military wing as a "terrorist" organisation.

Judge Adelina Ivanova sentenced the two men -- who fled Bulgaria and were tried in absentia -- to "life in jail without parole", finding them guilty of terrorism and manslaughter.

The two were identified as Lebanese-Australian Meliad Farah, 31 at the time of the attack, and Lebanese-Canadian Hassan El Hajj Hassan, 24, and were charged in mid-2016 as the bomber's accomplices.

Airport CCTV footage showed him wandering inside the airport's arrivals hall with a backpack on his back shortly before the explosion that tore through a bus outside the terminal that was headed to Sunny Beach, a popular summer destination on the Black Sea.

According to witness accounts, he tried to put his backpack inside the luggage compartment of the bus full of Israelis when it exploded.

The tourists who were killed were all in their twenties, except for a pregnant 42-year-old woman.

Prosecutors were unable to determine if the explosive was triggered by the bomber or remotely detonated by one of two men, who had also helped him to assemble the explosive device.

Prosecutor Evgenia Shtarkelova told reporters last week she "pleaded for the heaviest punishment because I consider that this terrorist act deserves to be punished in the heaviest possible way."

The two men were put on trial in absentia in January 2018 for a terrorist attack and manslaughter but were never tracked down.

According to an investigation into the bombing, they arrived in Bulgaria from Romania in June 2012, and left again on the evening after the attack.

A public defender for Hassan, lawyer Zhanet Zhelyazkova, countered that evidence for her client's alleged complicity with the attack was "only circumstantial."

Shtarkelova however said that the nature of the explosive device, the fake US driver's licences used by the two men, their Lebanese descent and some family ties "link both defendants (...) and the attack to the terrorist organisation Hizbullah."

The investigation into the attack found that the fake licences were made by the same printer at a university in Lebanon. It also said the suspects received money from people linked to Hizbullah.

In recent comments on the case, Bulgaria's chief prosecutor Ivan Geshev stressed that Hizbullah was behind the attack "in terms of logistics and financing".

The prosecution confirmed that it had no clue about the two men's whereabouts and that they are still sought on an Interpol red notice.

The court ruling is still subject to appeal to a higher court.

God bless hezbollah and Iran for attacking a tourist bus in Bulgaria full of zionists and for insisting on protecting our shia constitutional rights.

What heros you bunch of cowards. Well I'm not surprized, if Arafat the murderer got the Nobel price after he murdered Israeli sportsman in Olympic games in Munich in 1972 may be Hezballa will receive a medal from Mother Teresa.

Arafat was not as evil as Hizbala despite all the harm he’s caused... that’s how bad the Shia terrorist organization is.

I think the "a"and "t" are mixed up on your keyboard.

Hizbullah is an Iranian shiite terrorist organization and NOT Lebanese.. please stop disreputimg the Lebanese

Israeli Nazi? thats like saying a kizb girl scout member moo? Stupidity has no bounds but then again we have little john here who notches up another level.

Good news to put these rats in jail

Wallahi ya levant, my 31 year old cousin just got cured from a stage 4 cancer, so miracles do happen.... let’s hope we can cure Lebanon of its cancer.

Lebanese like you with your many names who are willing to work for Zionists have no future in Lebanon.

According to France Hizbala isn’t a terrorist organization.... because there’s a political and a military wing.... he forgot to mention that the leadership is the same people.

To the Israeli slaves: Let the Israelis serve sentences for the many massacres they have committed over the last century including massacres inLEBANON before talking about charging 2 Lebanese on circumstantial evidence.

Robert your dealing with the villiage idiot here, little John has the IQ of your left shoe. Pure example of the sophistication of a baffoon.

Tell me one country or one people that followed Iran or Syria are living decently well.