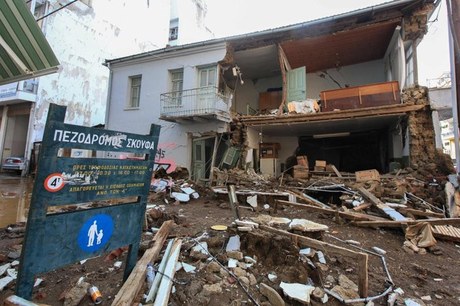 Mediterranean cyclone Ianos, known as a "medicane", has so far left three dead and one person missing.

Hundreds of people had to be rescued from flooded buildings as heavy rain and high winds wrecked homes, shops and warehouses in regions north of the capital Athens.

"Five thousand homes are flooded and a third of the city has no electricity," Karditsa mayor Vassilis Tsiakos told ERT.

It will take at least five days to get the city back to its feet, Tsiakos said.

Ianos forced flights and ferries to be cancelled on Friday as it barreled across Greece's Ionian Sea islands.

The city of Karditsa, about 300 kilometers (190 miles) north of Athens, was badly hit overnight Friday, with mudslides, falling trees and power cuts.

Mitsotakis expressed his condolences over the deaths and promised that all affected regions would receive support from the state.

Medicanes are a rare phenomenon only categorised by experts over the past four decades, according to Kostas Lagouvardos, director of research at the Athens Observatory.

"Mediterranean cyclones or hurricanes have tropical characteristics like those in the Atlantic, but they often have a smaller volume and are less intense," he told AFP over the weekend.

Lagouvardos says six medicanes have hit Greece since 1982, four of them since 2016.

Ianos was among the strongest medicanes recorded since the start of observations in 1969, he wrote in an article Sunday.

The last storm on this scale hit Greece two years ago, killing two people on the island of Evia.