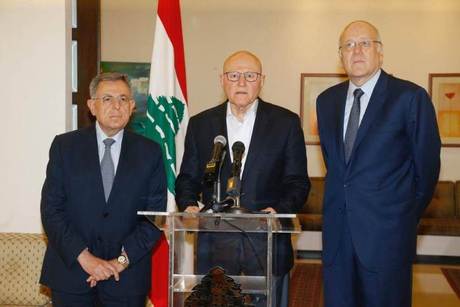 Former premiers Najib Miqati, Fouad Saniora and Tammam Salam on Tuesday distanced themselves from an initiative put forward by ex-PM Saad Hariri to resolve the row over the finance ministerial portfolio, describing the move as a “personal initiative.”

“Following the fabricated uproar over the finance ministerial portfolio, we consider ourselves not concerned with this initiative,” they added.

Miqati, Saniora and Salam also called for “preserving the constitution and immunizing it against any violation which some might consider as a step towards establishing a practice or a norm that contradicts with the text of the constitution.”

Our government were already traitors of the constitution, I'm with Hariri that an independent shiite can run as finance minister, not hezbollah nor amal