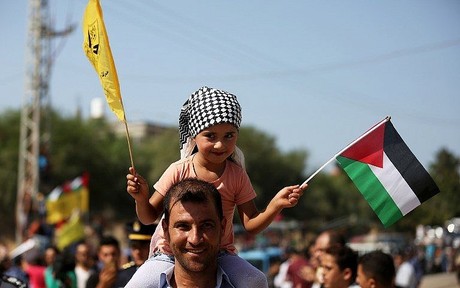 Gaza rulers Hamas and their rivals in the occupied West Bank, Fatah, have agreed to hold Palestinian elections after nearly 15 years, officials from both sides told AFP on Thursday.

Parliamentary and presidential polls will be scheduled within six months under a deal reached between Fatah's leader, Mahmoud Abbas, and Hamas political chief Ismail Haniyeh.

The last Palestinian parliamentary elections were held in 2006 when Hamas won an unexpected landslide.

Good luck to Fatoush and Hommus. Have some Halvah ice cream for dessert

Will these be free elections with european style debates ?

Will Palestinians show the world they are ready for full democracy ?

Or are these going to be "elections" with only 2 parties and no debate ?

It will be 100 times more democratic than the Jewish minority ruling the ethnic cleansing apartheid Zionist state.

You are very funny!!

An Apartheid state where the Jewish minority Control over 5 million Palestinians in the West Bank who have NO vote and another 5 millions who are forced to live in Exile with no vote. The Palestinians are the majority! freedom House is a Zionist organizations.

This will never happen.

It happened 15 years ago Zionist idiot.

You are blinded by your hatred of Jews and Israel. Elections were to occur every 5 years.

Cue the suspenseful music. Israelis, crawl under your beds, and I include the "non-Jewish" Israelis.

I'll believe it when I see it, not a moment before.

You need to stick with one name. Using 10 names will only make you hated 10 times more

Hey Israeli enemy:why don’t you come to Lebanon? You will be EMBRACED WARMLY if you know what I mean!

bigjohn, newsflash - I have been to Lebanon and was warmly greeted.

off course you did not tell the you are an Israeli!

There should not be any “elections” under military occupation especially when millions of Christian and Muslim Palestinians who are forced to live in forced exile ONLY because the Apartheid ethnic cleansing Zionist entity does not allow them to return to their homeland...are not voting.

The Arab league should be moved to Turkey and the Arab puppet criminal tyrants should be NECKLACED the way it was done In Apartheid South Africa.

You are very funny!!

Nah, most lebanese on this site just hate hezbollah and their Iranian sugar daddy due to setting Lebanon backwards and storing arms in civilian areas, sanctions etc. Welcome to free press 1948. But I'm sure if you have your way this will disappear along with any other freedom.

Post as much as you want but those ARMS will be pointed at your criminal existence until the Palestinian majority (mostly in exile because they are NOT Jewish and under military occupation) seize power and "Israel" is renamed Palestine.

What bigjohn does't want to take into account is that every person, including the Jews who was born in the Mandate before 14 May 1948 has a birth certificate stating specifically that he/she is a Palestinian.
Do the Moslems who were born in the West Bank or Gaza between that date and the 6 Day War have birth certificates showing this, I very much doubt it.

Very few Jews were born in Palestine before 1948 and most Jews were foreign conquerors. Jordan in 1948 SAVED the West bank Palestinians from Israeli ethnic cleansing like they did to of the the rest of 78% of Palestine. When the West Bank was part of Jordan between 1948 and 1967, nearly half of the Jordanian parliament was represented by West bank Palestinians. In 1973 Jordan agreed that the west bank should be part of Palestine and not Jordan especially since 40% of the West bank Palestinians and 70% of Gazans Palestinians were ethnically cleansed from "Israel" in 1948. You have to be out of your mind to think that any nation would agree to 22% or less of the land when they are the majority without the right of return which is an INALIENABLE RIGHT.

bigjohn, as I have said to you on more than one occasion, it would be most advantageous if you, would check up on the facts, before your write your biased nonsensial "facts".