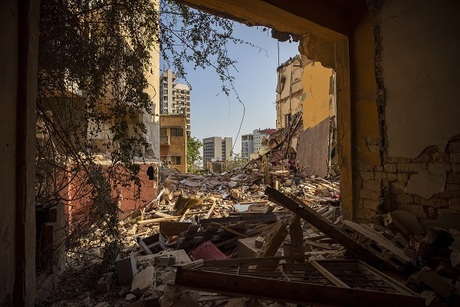 Lebanese authorities on Thursday unveiled a compensation program for the thousands of homes and businesses devastated by the August 4 mega-blast at Beirut's port.

President Michel Aoun signed a decree allocating 100 billion Lebanese pounds (more than $66 million at the official exchange rate, or $13 million on the black market) to the program, his office said.

It added that the army and Beirut municipality would be tasked with setting up a mechanism to distribute the funds.

The compensation will go to owners of homes and businesses damaged in the explosion that left more than 190 dead and devastated swathes of the capital, a source at the presidency said.

According to an assessment by the army, the blast caused by a consignment of ammonium nitrate damaged almost 61,000 homes and over 19,000 businesses.

On August 9, the international community pledged around $300 million in emergency aid at a conference jointly organized by France and the United Nations.

The U.N. is to coordinate the aid to ensure it reaches those in need directly rather than through Lebanese government bodies, which are widely accused of corruption.

Only the people connect to the crooks will get money the ones with no connections will get $0.00 USD and everybody knows this. So another way of buying votes and the sheep will be lead to the slaughter yet again as they are dumb and blind...

How generous, $13 million for 61,000 homes and 19,000 businesses, or about $160 per home or business. How ridiculous! $13M won't even pay business damage for one day. Stop making fool of people and destroying our economy. No one is fooled. Since 2006 Gebran Sons said Aoun Faustian deal selling Lebanon to Hizbiollah for personal benefit is leading Lebanon to the abyss! Reckoning day is coming even if not as quickly as we hope but will come surely!

when will someone somewhere lift a finger to destroy the stupid idea that segments lebanon into religious groups which partly caused the 15 years war and now has led to leaders with conflicting interests destroying the infrastructure considered normal to most other countries. start by getting rid of current parliament and create afresh non tarnished individuals from next generation qualified with degrees in town planning and political subjects.

Selwyn Assaf, you are 110% correct and until the Ziams show some courage and stay home with their millions and look after their grandchildren, nothing will change. They hide behind the armed forces that seem not to want to see their country a fairer place to live and support a new Government as you correctly point out. The Offer by the President won't even pay to fix 5% of the damage and I don't see any of the stolen wealth returning to fix the problem. If this was a movie you would call it the "Jokers"!!

What a joke!! $13 million allocated to cover damage worth over $5 BILLION. The real irony is that with this compensation offering Aoun probably sees himself as the saviour of those he left homeless and jobless. At the end of the day this is just a tactic to avoid massive lawsuits and a means to convince the international community that the Government is doing right for its people. No doubt Aoun and the rest of his little minions will steal this money before it gets to the people.