Franjieh Sees 'Good Intentions', Says ex-PMs Have No Right to Pick All Ministers 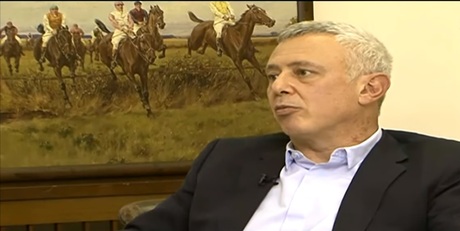 There are “good intentions” and we can overcome the crisis, Marada Movement chief Suleiman Franjieh said on Thursday about the cabinet formation process.

“The meeting with French President Emmanuel Macron did not witness an agreement on an independent government but rather on an effective government,” Franjieh said on an interview with MTV.

“Known for his pragmatism, the French president’s condition was that competence should be the basis in picking the ministers and not political loyalties,” the Marada chief added.

Noting that “the former premiers chose the prime minister-designate” and that the other camp agreed to their choice “because they represent the Sunnis,” Franjieh rejected granting the ex-PMs the right to pick all ministers.

“Why would they also choose our minister?” he asked.

Franjieh also pointed out that Speaker Nabih Berri’s demand to get the finance portfolio is “not new” and had been repeated during the formation of the previous four governments.

“He raised it with me when I was a presidential candidate,” the Marada leader revealed.

“Back then, I expressed neither approval nor rejection, but why was this demand acceptable in the past while today it has become rejected?” Franjieh asked.

As for the latest U.S. sanctions that were imposed on Marada’s ex-minister Youssef Fenianos over alleged shady deals with Hizbullah, Franjieh called the sanctions “political.”

“The Americans communicated with us and told us that there is no message to us behind them,” he added.

Asked about President Michel Aoun’s warning that the country might “go to hell,” Franjieh described it as a “slip of the tongue.”

“Neither circumstances helped him nor luck, but at the same time he did not know how to surround himself with the right assistants,” the Marada chief said.

Ever since French occupation. It is still a million times more democratic than terrorist Israel.

Would be interesting to know your source for this info and word from the Faqueeh is not good enough.

The Source: The Gemails, Arslan, Jumblats, ETC are before independence.

Realy Canadaleb? your arguing with the village idiot my friend and you expect to win him over?. Little John its the bussiest time of the day go play in the streets or even better go show the Israelis what you are made from.

whyaskwhy Don't try to question anything. You will destroy your brains.

Big John what is your take on this sudden love story between the Arabs and Israel.

Back then, I expressed neither approval nor rejection, but why was this demand acceptable in the past while today it has become rejected?” Franjieh asked.

Another idiot who just doesn't get it!

Franjiyi gets excited and thinks his opionin actually matters outside his circle of zo3ran lol.