Asian Markets Rise after Tough Week but Optimism at a Premium 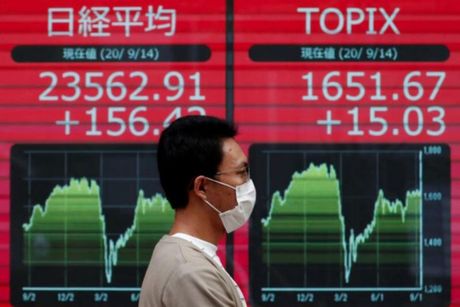 Asian markets rose Friday on bargain-buying after another torrid week for investors, who are growing increasingly concerned about US lawmakers' failure to even hold talks on a new stimulus and surging virus infections that are prompting fresh containment measures.

There was a sliver of hope Thursday for some movement on Capitol Hill after House Speaker Nancy Pelosi said Democrats had started putting together a $2.4 trillion rescue package and that they were still looking to find an agreement.

At the same time, Treasury Secretary Stephen Mnuchin reiterated that a new deal was still needed, adding: "If Democrats are willing to sit down, I'm willing to sit down any time for bipartisan legislation. Let's pass something quickly."

However, the proposal still dwarfs the Republicans' most recent offer and is also larger than the $1.5 trillion President Donald Trump said he is willing to accept.

While Federal Reserve boss Jerome Powell said the economy was performing better than expected for now thanks to income support, he told a congressional committee "it's likely that additional fiscal support will be needed".

"The risk is that they'll go through that money, ultimately, and have to cut back on spending and maybe lose their home," he said. "That's the downside risk of no further action."

Adding to the problems are heightened hostilities over a replacement for liberal Supreme Court justice Ruth Bader Ginsburg who died this week.

"The chances of passing another stimulus package appear to be dimming given the Supreme Court nomination is taking away much-needed oxygen, while the Democrats' latest proposal... is still well above where Republicans want to land," said National Australia Bank's Tapas Strickland.

The need for a new deal was highlighted by data showing jobless claims came in more than expected last week as the recovery in the world's top economy stutters owing to a pick-up in new virus cases.

Aneta Markowska, at Jefferies LLC in New York, said it was "a close call" on whether a new stimulus would be agreed, adding: "While still possible, there is a high risk that it does not happen this year. Without it, we would expect the economy to hit a major speed bump in the fourth quarter."

There was a little cheer from Washington after Republican Senate Majority Leader Mitch McConnell and others in the party joined the Democrats in assuring voters that the winner of the November 3 election would take office as planned in January.

The comments came after the president suggested he might not accept the result, citing unfounded claims of mail-in voter fraud.

Still, global traders are growing increasingly concerned about a surge in coronavirus infections in several countries that have seen governments impose partial lockdowns and social distancing measures, and shortening opening times for bars and restaurants.

The moves have sparked concerns of another painful hit to the economy.

"At this point in the recovery, a return to the Covid-19 abyss due to stricter lockdown measures is quite frankly something the global economy cannot afford," said Stephen Innes at AxiCorp.

He pointed to the negative market reaction to the imposition of "ultralight level of mobility restrictions".

"I think we dodged a bullet on this one so far, but this is not to say lawmakers who were slow to respond to the initial coronavirus outbreak will not re-impose stricter mobility restrictions if the Covid-19 curve steepens," he added.

In early Asian trade, Hong Kong, Tokyo, Shanghai, Seoul and Singapore enjoyed healthy gains, while Sydney jumped more than one percent. There were also gains in Manila and Jakarta.