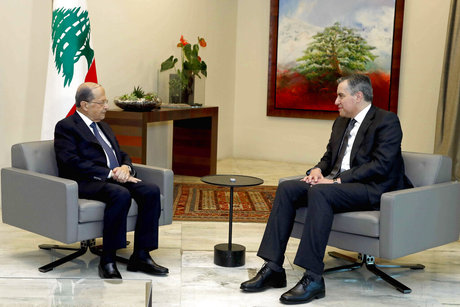 "I put the President in the picture of the consultations and we agreed to hold another meeting tomorrow at 11:00 am," Adib announced after the 40-minute meeting.

The Presidency later announced in a tweet that Aoun and Adib "evaluated the outcome of the ongoing contacts," noting that the PM-designate "did not present any government format or line-up vision" to Aoun.

TV networks had reported that Adib had arrived at the palace carrying a file for the first time since being named PM-designate. Al-Jadeed TV said the file detailed the sectarian distribution of the ministerial portfolios without the mention of any names.

MTV for its part said that Adib "did not carry a draft cabinet line-up to the Baabda Palace but rather some ideas that he discussed with the President."

Adib had postponed Friday's meeting from the morning until the afternoon.

The meeting with Aoun comes a day after the PM-designate met representatives of Hizbullah and Amal Movement in a bid to resolve the row over Shiite seats in the cabinet.

Adib--please resign. dealing with these mafia is worthless---give them an ultimatum, and if they don't meet the conditions, then resign----and hopefully france, the eu, the us and others will start putting sanctions on these idiots including barry, the clown and the rest of m8. they want nothing more to suck all of the money out of this country for themselves and adib needs the world to see that.