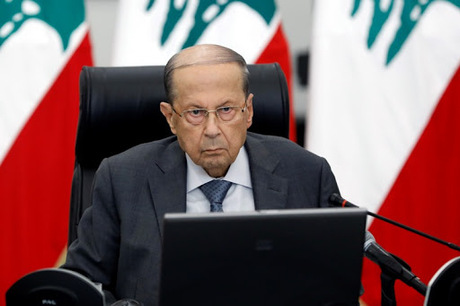 President Michel Aoun accepted the resignation of PM-designate Mustafa Adib and was set to "take the appropriate measures according to the requirements of the constitution", the president's office said Saturday.

"The initiative launched by French President Emmanuel Macron is still ongoing and still receives my full support," it quoted Aoun as saying.

Adib stepped down Saturday, saying he had been unable to form a reform-minded government to lift the country out of its worst economic crisis in decades.

Adib, a little-known 48-year-old former ambassador, was named just hours before French President Emmanuel Macron made his second visit to the crisis-hit country since the August 4 blast, pressing for the speedy formation of a reformist government.

Macron had launched an initiative to help Lebanon steer out of multiple crises. He described his initiative including a road map and a timetable for reforms, as “the last chance for this system.”

Aoun should follow up and step down---a weaker leader than him, the country has never seen.

I hae to say that I told you so, but I have been saying fro quite some time now, this ruling class DOES NOT and WILL NOT change and will NOT REFORM. Let the system collapse on it's weight. As much as it would hurt the average people who are already under tremendous economic, and social catastrophe, it's the only way the country or whatever is left of it can reborn again with a new dynamic forward looking politicians.

It all should start with new election law based on the One Man One Vote. Any other form is just painting the status quo.

As if he had a choice. One call from kizb sent adib on his merry way.

Resign and remain respected, every day you stay in the palace paralyzed and not able to take decisive decision you prove the weak you are.. Explain to the world why you did not accept Adib government and let the parliament vote for it.
Next steps to the solution if you are the strong president:
1- Resolve the parliament
2- assign the army commander in charge to run the country until a new parliament is born,
3- let them elect new president
4- elect new prime minister to reform the country

I think Aoun should resign as President, appoint himself as Interim Prime Minister (like in 1988), form a military government, and launch a war of elimination against all the militias, except Hezbollah. The LAF-Hezbollah tandem can then get to the business that matters most to the Lebanese people, namely liberating Palestine from the Zionists, and Mecca from the Wahhabis.

You are just a terrorist who obey Israel