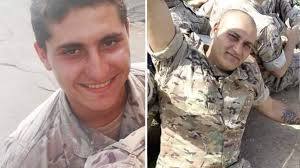 Gunmen opened fire on an army post in the northern area of Araman at dawn Sunday, triggering a shootout in which two soldiers and one gunman were killed, the army said.

Another gunman fled to an unknown destination, according to an army statement.

The incident occurred at an army post in Araman in the Minieh region. An army operation is underway to arrest the fugitive and uncover the circumstances of the attack, the military said.

Another army statement said the assailant, Omar Brais, was carrying an explosive vest and hand grenades when he tried to storm the army post on a motorcycle. "Guards confronted him, which resulted in his immediate death," the statement said.

The shootout occurred as the army was engaged in a heavy exchange of fire with militants linked to extremist groups in northeast Lebanon, close to the border with Syria. The standoff began after the Internal Security Forces raided a house in the Wadi Khaled area where the group was holed up.

Videos circulating online from the remote area showed the use of rocket propelled grenades in the battle. The army sealed off the area and has not commented on the operation. The ISF meanwhile said that "all the terrorists" who were holed up in the house were killed in the confrontation.

LBCI television meanwhile reported that "nine terrorists were killed and four others arrested" in the operation.

A security source said the death toll could rise as more bodies could be buried under the rubble of the house, part of which was blown up during the police operation.

The ISF statement said the terrorist cell was made up of more than 15 suspects. It added that three had been arrested in previous raids.

The ISF statement said the "terrorist cell" was made up of more than 15 suspects. It added that three had been arrested in previous raids.

A security official said the group includes militants linked to one of Lebanon's most wanted extremists, Khaled Tellawi, who was killed earlier this month during a raid in the country's north that also left four Lebanese soldiers dead.

Tellawi was blamed for an attack last month that killed three men in a predominantly Christian northern village. He was described as a member of an extremist group that had links to the Islamic State group. The security official spoke on condition of anonymity in order to discuss the operation.

Every other day the thugs in Baalbeck shoot and kill army soldiers yet they are not referred to as shia extremists. It has been Aoun's policy to depict the sunnis of Lebanon as either corrupt or terrorists.

Nothing than deception used by the Iranian proxy, just like the incidence with fath islam at bedawi. As the syrian regime is in control of borders surrounding Lebanon a huge opportunity has arisen into shifting focus from the detriment of Lebanon. Pure in the so called terrorist make havoc, then let us polarise the christians into taking sides, and we the real traitors i.e Iranians will offer you a solution out of this distress. By now this should be a classic. Don't worry, more surprises is still to come. Remembering Haniyes visit?

But it’s copy pasted from AFP and the AP.

Now you see why Lebanon needs the shia terrorist militia. As more and more Lebanese started to call for disarming hezbollah, a button was pressed and these groups started to emerge ( regardless of their sect ) at Iran and Hezbollah's orders.

That’s one of the consequences for having a weak state and an even weaker head of state . It’s exactly like a human body, when the immune system is weak, opportunistic diseases try to take over. There’s no political will to boost Lebanon’s immune response, only America donates weapons to the LAF but it’s insufficient as the head of the LAF is also an opportunistic disease . We need to clean house first.

This weak "state" takes orders from the US (Israeli Lobby), which does not allow countries it does not like to give the LAF real weapons so the LAF is stuck with receiving American Disney's toys weapons.

ISIS have been helping the Israeli enemy for years with their attacks against everyone except Israel. They replaced the Antwan lahd SLA.

Isis was created by Bashar and Maliki. It may have been hijacked by other regional powers later on, but the Shia and Alawis created a Sunni version of themselves.

Yes, a button was pushed!

Big John my man, your idol Bashar has been helping Israel knock out the Iranians by giving them their positions in Syria, even your lord Putin is in on the game.

Big John isn't lebanese. He is probably Palestinian or of that heritage based on his hatred of Israel. Clearly He has no interest in the prosperity of Lebanon