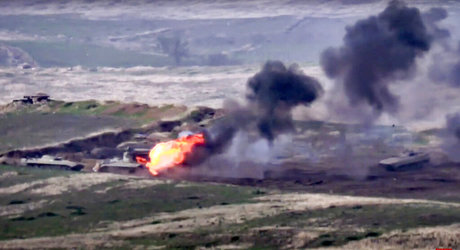 Armenia and Azerbaijan put themselves on a war footing after heavy fighting erupted Sunday between Azerbaijan and Armenian separatists claiming military and civilian casualties on both sides, including at least one child.

The worst clashes since 2016 have raised the specter of a fresh large-scale war between arch enemies Azerbaijan and Armenia that have been locked for decades in a territorial dispute over Nagorny Karabakh.

In a televised address to the nation, Azerbaijan President Ilham Aliyev vowed victory over Armenian forces.

"Our cause is just and we will win," Aliyev said, repeating a famous quote from Soviet dictator Joseph Stalin's address at the outbreak of World War II in Russia.

"Azerbaijani army is fighting on its territory,"  he said.

Both Armenia and the breakaway region of Nagorny Karabakh declared martial law and military mobilization.

Karabakh's leader Araik Harutyunyan told an emergency parliament session in the enclave's main city of Stepanakert that he had "declared martial law" and a mobilization of all those fit for military service.

Armenia said earlier Sunday that Azerbaijan attacked civilian settlements in Nagorny Karabakh including  Stepanakert, with the attacks killing of a woman and child.

Azerbaijan's defense ministry said it had launched a "counter offensive to suppress Armenia's combat activity and ensure the safety of the population," using tanks, artillery missiles, combat aviation and drones.

"There are reports of dead and wounded among civilians and military servicemen," the spokesman for the Azerbaijani presidency, Hikmet Hajiyev, said.

Karabakh's ombudsman Artak Beglaryan said "there are civilian casualties" among the region's population.

Talks to resolve one of the worst conflicts to emerge from the 1991 collapse of the Soviet Union have been largely stalled since a 1994 ceasefire agreement.

A major confrontation between the ex-Soviet Caucasus neighbors would draw in big regional players Russia and Turkey.

Russia called for an immediate ceasefire as did France.

"We are calling on the sides to immediately halt fire and begin talks to stabilize the situation," Moscow's foreign ministry said.

"Armenia violated the ceasefire by attacking civilian locations," he said.

"We have information that mercenaries from Turkey and other countries were airlifted to Azerbaijan," he said.

"The Turkish army is already in Azerbaijan, under the guise of military drills," he claimed.

The claims were denied by the defence ministry in Baku which said its forces were responding to an Armenian offensive.

Hajiyev said Armenian forces in Karabakh "blatantly violated the ceasefire regime and, using large-calibre weapons, mortar launchers and artillery have launched an intense attack on the positions of Azerbaijan's armed forces along the frontline."

In July, heavy clashes along the two countries' shared border -- hundreds of kilometres from Karabakh -- claimed the lives of at least 17 soldiers from both sides.

During the worst recent clashes in April 2016, around 110 people were killed.

Azerbaijan is a Shia country.... this explains their hatred of Christian minorities in karabakh.

It’s a heretic ideology which only produces dictatorships.

Although Azerbaijan has held several elections since regaining its independence and it has many of the formal institutions of democracy, it remains classified as "not free" By Freedom House.

In recent years, large numbers of Azerbaijani journalists, bloggers, lawyers, and human rights activists have been rounded up and jailed for their criticism of President Aliyev and government authorities. A resolution adopted by the European Parliament in September 2015 described Azerbaijan as "having suffered the greatest decline in democratic governance in all of Eurasia over the past ten years," noting as well that its dialogue with the country on human rights has "not made any substantial progress."

S.o.s i didn't say it was a good state nor a free state. I said it was a secular state meaning it isen't controlled by religion nor is it fighting for religious reasons. They even sent in contestors to the eurovision song contest. You know very well that their problem with armenia is about land and two different feuding nations and not about religion yet you tried to turn it into shias hating christians. That is pathetic and proves how little credibility you have. I don't agree with the shia on many things but spreading lies about them is disgusting. This is what happens to people who ally themselves with the wrongdoers, you lose your sense of what is right and wrong. Hizb supporters are also guilty of this. And speaking of heretics, based on certain things you have written, you are a heretic according to mainstream Islamic teachings.

Armenia and Azerbaijan are both acting like idiots. They should sit down and resolve the situation peacefully. If they fail, they should seek independent tribunal or the international court of justice ruling.

You can’t negotiate with the Aliev dictator.... because when a dictator concedes things, he shows a weakness, and becomes de facto toppable.

This being said, the way the Armenians shot down 4 helicopters in a single day shows that russia has been playing a role there.