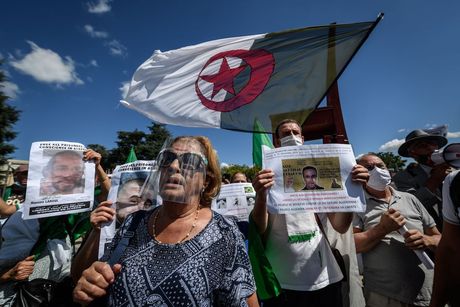 An Algerian court on Sunday sentenced to three years in jail a member of the "Hirak" protest movement that forced longtime president Abdelaziz Bouteflika to resign last year, a rights group said.

The group, CNLD, lists prisoners of conscience in Algeria. It said earlier this month that 61 people were still behind bars for acts related to "Hirak".

It described the three-year sentence handed down to Brahim Laalami as "incredible and unacceptable".

Khaled Tazaghart, a former deputy and anti-regime activist, was also sentenced to one year in a separate trial, the Algerian League for the Defence of Human Rights (LADDH) added.

The Hirak movement emerged in February 2019 and led to the resignation of Bouteflika, whose plans to run for a fifth term sparked the protests.

Weekly demonstrations continued after Bouteflika's departure to demand wholesale political change, but halted in March due to restrictions to end the novel coronavirus crisis.