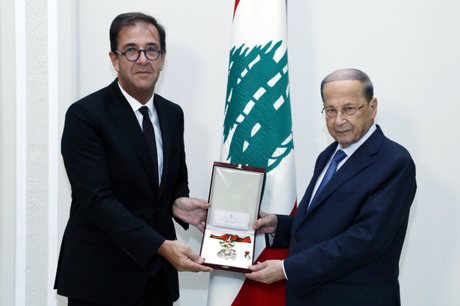 President Michel Aoun expressed adherence to the French initiative during talks with French Ambassador to Lebanon Bruno Faucher, and regretted that PM-designate Mustafa Adib was unable to form a government, the National News Agency reported on Monday.

The President sounded regret that Adib was unable to form the new government according to the principles of the French President’s initiative, especially with regard to the reforms that need to take place, reported NNA.

Aoun thanked Faucher for the efforts he made during his stay to strengthen the Lebanese-French relations in all fields, wishing him success in his new diplomatic mission.

Faucher is on a farewell visit to Baabda concluding his three-year term in Lebanon.

In recognition of this, President Aoun awarded Faucher the National Order of the Cedar in the rank of Senior Officer.

Go to Hell where you belong Aoun!

Aoun is a traitor..Hang him

A few years after Aoun dies I’ll take my neighbor’s German shepherd for a stroll at the cemetery...

Why wait so long?

his body must decompose first.

like naughty school children being told off by the rest of the world leaders. It would be funny if they were't so dangerous. Lebanon ruling class seem to be devoid of honour or responsibility, do they not feel shame or embarrassment at the way they are behaving, or is it that they simply don't care. Please stop dragging lebanon and its people into the gutter with you.