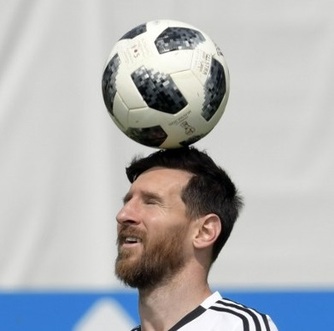 Lionel Messi put his summer transfer dispute behind him, Cristiano Ronaldo defied gravity, and Mauro Icardi got back on track for Paris Saint-Germain, but there was a stunning defeat for Bayern Munich on a big weekend in Germany.

Below are some of the main talking points from the action across the continent:

After such a turbulent summer, Barcelona could not have asked for a better way to start the season as they crushed Villarreal 4-0 at the Camp Nou, with all the goals in the first half.

Lionel Messi captained the home side and scored a penalty in his first competitive outing since trying, and failing, to force through a move away from his boyhood club.

The early signs are Messi will let his football do the talking in the coming months, which can only be good news for a Barca side beginning life under new coach Ronald Koeman.

"It is always good and important to win matches. If you win, you have tranquility," said Koeman. For now anyway. The Catalans go to Celta Vigo on Thursday.

- Bayern humbled to give hope to rivals -

Less than 72 hours after they added more silverware by winning the UEFA Super Cup against Sevilla in Budapest, Bayern Munich's aura of invincibility was blown away in stunning fashion as Hansi Flick's team lost 4-1 at Hoffenheim.

After 32 games unbeaten, and 23 successive victories in which time they also won the Bundesliga, the German Cup and the Champions League, the Bavarians suffered a first loss since last December.

With Robert Lewandowski left on the bench at kick-off, they suffered their worst defeat since the 5-1 loss at Eintracht Frankfurt last November which cost previous coach Niko Kovac his job.

This is surely just a blip for Bayern though, and credit must go to Hoffenheim, for whom Andrej Kramaric scored twice. He now has seven goals in three games this season, after ending last season by scoring four goals against Borussia Dortmund.

Hoffenheim coach Sebastian Hoeness was appointed in the summer, poached from Bayern's second team. He is the son of former Bayern player Dieter Hoeness, and the nephew of ex-Bayern president Uli.

As Germany's third richest club with a huge fanbase, it was surprising to see Schalke keep faith in coach David Wagner despite a shocking end to last season in which thay failed to win any of their final 16 Bundesliga games.

The ex-Huddersfield Town manager was on decidedly shaky ground before opening the new season with a humiliating 8-0 loss at Bayern. Saturday's 3-1 home defeat by Werder Bremen means Schalke's start is the worst in Bundesliga history. Wagner was sacked on Sunday.

"We hoped that we could turn things around. Unfortunately, the first two matches did not produce the necessary performances and results," said Schalke sporting director Jochen Schneider.

Juventus needed Cristiano Ronaldo at his best to prevent Andrea Pirlo suffering his first defeat as coach as the Italian champions came from behind to draw 2-2 at Roma.

A Ronaldo penalty cancelled out Jordan Veretout's spot-kick before the same player put Roma back in front. Adrien Rabiot was then sent off for Juve, but Ronaldo equalized in the 69th minute with a tremendous leap, hanging in the air to head in Danilo's cross.

Now 35, Ronaldo remains arguably the best header of a ball in the world. Juve, for whom Alvaro Morata started after returning to the club on loan from Atletico Madrid, remain a work in progress though, and it is Napoli who have made the best start to the season. They are top after crushing Genoa 6-0.

- Icardi hits back for PSG to answer critics -

The Argentine looked slow and overweight, was dropped for the Champions League semi-final and final in August, and did not play in PSG's first two league games this season after testing positive for coronavirus.

On Sunday, though, he got back on track, converting two Kylian Mbappe assists for a brace as PSG won 2-0 at Reims in Ligue 1.

It was PSG's third straight win, and it was Icardi's first goals in almost exactly seven months.