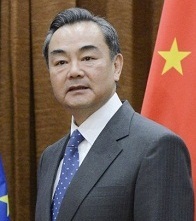 The coronavirus is a wake-up call for the world, and trading blame "will only bring greater disaster," China's foreign minister said Monday.

Days after the United States and China lashed out at each other on U.N. platforms over the coronavirus outbreak, China's top diplomat Wang Yi told a forum in Beijing that individual countries had "turned the solemn international venue of the U.N. into a performance space for serving their own politics and self-interest".

China has recently moved to reshape the pandemic narrative away from its early outbreak in Wuhan to a story of the country's success in stopping the virus spread.

But the U.S. has led nations criticizing Beijing for its handling of the epidemic.

China suppressed news of the respiratory disease when it first emerged last year and initial advice played down risks of transmission.

"Apart from working together and helping each other, we have no other choice," Wang added at the event co-hosted by the China Public Diplomacy Association, where he sought to position China as a responsible major power.

Wang's remarks came less than a week after US President Donald Trump used his annual address to the U.N. General Assembly to attack China's record, and the U.S. ambassador to the global body took an outraged tone that surprised diplomats.

Trump in his speech demanded action against China for spreading the "plague" of Covid-19 to the world, drawing ire from Beijing.

"As U.N. Secretary-General (Antonio) Guterres emphasized, this epidemic is not only a wake-up call, but also a crisis drill," said Wang.

"In the face of global challenges such as the epidemic, if we go our own way or treat our neighbors as the enemy, it will only bring greater disaster."