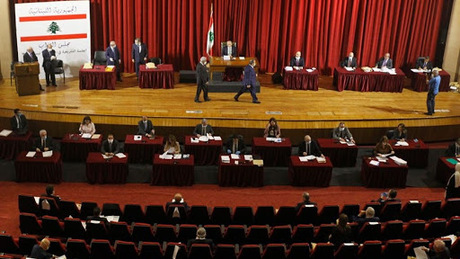 Two controversial draft laws, a general amnesty law and lifting bank secrecy, top an agenda to be discussed by lawmakers during a two-day legislative session at the UNESCO Palace, media reports said Tuesday.

Speaker Nabih Berri called lawmakers for the meeting to study and ratify around 40 draft laws and proposals on the agenda, most notably the general amnesty law.

Political parties in Lebanon are divided over general amnesty, with Hizbullah and Amal Movement advocating for its approval, while the Lebanese Forces and Free Patriotic Movement express reservation.

Other draft laws and proposals will be tabled and ratified including lifting bank secrecy for public officials since 1990, when the Taef accord was agreed. Illicit enrichments and establishing a temporary unemployment fund are also listed on the agenda.

Political parties are divided over what crimes should be pardoned and included in the controversial amnesty law.

The law involves a pardon for Lebanese who fled to Israel after its withdrawal from the South in 2000, another for Islamists jailed over terror-related offenses and one for drug-related offenses that would benefit prisoners who hail from the Bekaa.

Families of Islamist prisoners have repeatedly rallied demanding the approval of the law.

Lebanon had one general amnesty after the end of the civil war in 1990.

Can someone please bomb this building during the session? This would be the best thing to ever happen to Lebanon

Figures that Barry would want to free the criminals from jail. And it is no surprise that a large segment of them are amal.