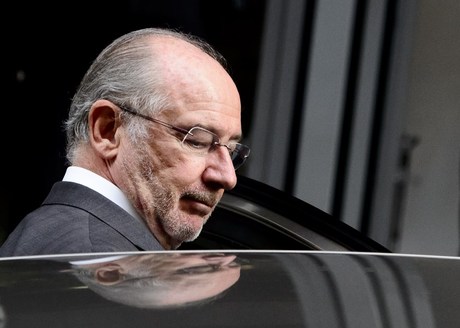 Former IMF chief Rodrigo Rato and all other defendants put on trial on accusations of fraud and falsifying the books in the 2011 stock listing of Spain's Bankia bank were acquitted on Tuesday.

The court said bank's stock listing had received approvals "from all necessary institutions".

The listing was very popular among small investors, who lost their shirts when the Spanish state had to nationalise the bank the following year and inject 22 billion euros ($25.7 billion) to keep it from collapsing.

Rato, who headed the International Monetary Fund from 2004 to 2007, led the merger in 2010 of several struggling banks into Bankia.

The image of a smiling Rato ringing the bell and sipping champagne on July 20, 2011 to mark the start of Bankia's listing has since become a symbol of the scandal.

More than 300,000 small shareholders bought share packages for a minimum of 1,000 euros, attracted by a major advertising campaign and the profits boasted by the bank.

But in 2012, after a disastrous year that saw its share value collapse, the bank admitted that in the year it listed it had actually made a loss of close to three billion euros.

In addition to bailing out Bankia the Spanish state also had to seek an EU rescue plan for the nation's entire banking sector as investor confidence had been shaken.

During his trial Rato said Spain's central bank was fully aware of everything that went on in Bankia.

Rato was economy minister and deputy prime minister in the conservative government of Jose Maria Aznar from 1996 to 2004, before going on to head the IMF.