Ex-PMs Hit Back at Nasrallah over Govt. Formation Accusations 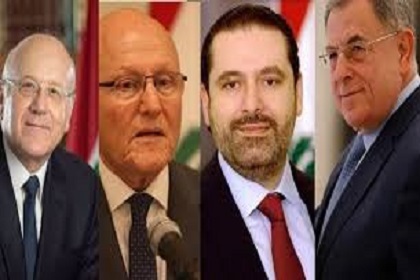 In a joint statement distributed by Hariri’s press office, the ex-PMs noted that the French initiative had called for “suspending everything related to conventional domestic politics and the issue of competition between blocs and parties for several months.”

The parliamentary blocs were supposed to “agree on a small salvation government comprised of competent specialists not named by political parties, in order to implement a purely reformist economic, financial, monetary and administrative program,” the ex-PMs said.

Stressing that they did not attempt to “form the government on behalf of PM-designate Mustafa Adib and did not try to impose a certain candidate or portfolio,” the former premiers accused Nasrallah of seeking to “spark a sectarian clash between the President and the PM-designate by claiming the presence of infringement on the President’s constitutional powers.”

Moreover, the ex-PMs added: “Sayyed Nasrallah was not successful in returning to the May 2008 events to remind of the attack against Beirut, which the Lebanese have interpreted as an unacceptable threat to resort to chaos, violence and security mayhem, whose dangers would not spare anyone.”

Noting that Nasrallah “wants a government in which his party would be represented and the other parties would name their representatives for the various ministries,” the former premiers warned that this “recipe” had led to the failure of Hassan Diab’s government.

The ex-PMs concluded by stressing their keenness on national unity, the French initiative and President Emmanuel Macron’s “great role.”

Tsk, tsk
Although all agree that Hizb was the main culprit for the failure of the initiative, you guys bare much responsibility for opting to openly stick it to Hizb and turning it into a Shiite/Sunni power struggle.
And our president, what can one say other than he's completely beholden to Hizb and not strong enough to sign a government and put the onus squarely where it should be in our system - parliament.
Shame on you ALL.

Since 1992 multiple ex-PMs and ex-Presidents but no ex-Parliament speaker (Husseini pre 1992) I wonder why.

4 crooks who represent very well 99% of all politicians.