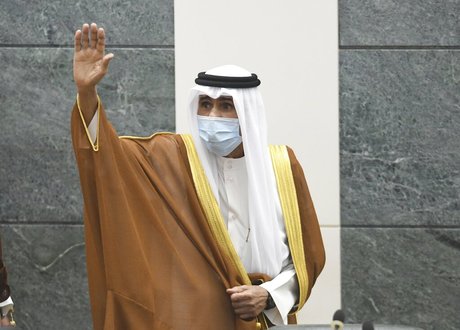 Kuwait's late ruler Sheikh Sabah al-Ahmed Al-Sabah, an acclaimed diplomat and mediator, was laid to rest on Wednesday, shortly after his half-brother was sworn in as the new emir.

Sheikh Sabah, who ruled the oil-rich nation for 14 years, died on Tuesday after undergoing treatment in hospital in Minnesota from July.

A Kuwaiti government Airbus A340 carrying his remains from the United States landed in the capital, where roads were cleared to allow passage of a convoy to the Bilal bin Rabah Mosque for funeral prayers.

The new emir, 83-year-old Sheikh Nawaf al-Ahmed Al-Sabah -- who was sworn in at the National Assembly earlier Wednesday -- was at the airport to receive the body along with other Kuwaiti officials, all wearing masks in line with anti-coronavirus measures.

The late emir's remains were then buried at the Sulaibikhat Cemetery, in a simple ceremony at the public facility, in keeping with tradition.

The royal court said the funeral was largely restricted to the emir's relatives -- a move likely designed to avoid large crowds due to the global health crisis.

Qatar's ruler Emir Sheikh Tamim bin Hamad Al-Thani -- embroiled in a Gulf diplomatic dispute in which Kuwait has mediated -- took part in the funeral prayers, according to official Qatari media.

Sheikh Sabah earned a reputation as a shrewd, unshakeable leader who helped steer his country through the 1990 Iraqi invasion, crashes in global oil markets and upheavals in parliament and on the streets.

World leaders and Kuwaitis alike have hailed the legacy of the late emir, architect of the nation's modern foreign policy and mediator in some of the worst crises to grip the Gulf.

"This man was the safety valve of the Arab world, not just for Kuwait," Bandar al-Dahani, a Kuwaiti citizen, told AFP.

"God willing, that goodness will be in Crown Prince Sheikh Nawaf and he will follow the emir's path."

Sheikh Nawaf, who has held high office for decades but earned a reputation for modesty, was visibly emotional as he addressed the National Assembly.

"I promise you that I will do my best and everything in my power to preserve Kuwait, its security and stability, and to ensure the dignity and well-being of the people," he said after taking the oath of office.

He called for unity in facing the region's challenges and committed himself to Kuwait's "democratic approach" in the address before lawmakers, who wore masks and were spaced in line with social distancing.

Kuwait, unlike other Gulf states, has a lively political arena with a fully elected parliament that enjoys wide legislative powers and can vote ministers out of office.

Sheikh Nawaf, who was named heir apparent in 2006,  takes over as Kuwait faces the repercussions of the coronavirus crisis, which triggered a sharp decline in oil prices and severe economic consequences for Gulf states.

He served as defense minister when Iraqi troops rolled into the oil-rich emirate in 1990, and also as interior minister in the face of challenges from Islamist militants.

Analysts do not expect him to usher in major policy changes, despite historic decisions by Kuwait's neighbors, the UAE and Bahrain, to establish relations with Israel in recent weeks.

Despite expectations of a smooth succession, there could be more spirited debate over who the new crown prince should be.

Kuwait's constitution stipulates that the ruler should be a descendant of the nation's founder, Mubarak al-Sabah. By tradition, the throne has for the past four decades alternated between two branches of the family -- the descendants of his sons, Salem and Jaber.

However, when Sheikh Sabah, who is from the Jaber branch, ascended to the throne in 2006, he named his half-brother as his heir, sidelining the Salem branch.

"Sheikh Nawaf al-Ahmed should be viewed more as a caretaker than as a watershed new leader," said Cinzia Bianco, a research fellow at the European Council on Foreign Relations.

"Behind the scenes, however, younger princes would likely continue to compete to succeed him."