Israel under Diplomatic Fire over Arms to Azerbaijan 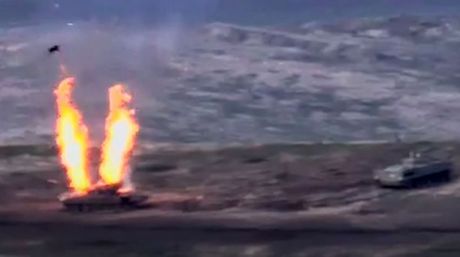 A major supplier of arms to Azerbaijan, Israel has come under diplomatic fire from Armenia over the struggle between the Caucasus neighbors in disputed Nagorno-Karabakh.

Armenia, a country long-seen as close to Israel's nemesis Iran, only opened an embassy in Tel Aviv on September 17, but Yerevan recalled its ambassador barely two weeks later, citing weapons sales to Azerbaijan.

While Israel's president on Monday spoke with his Armenian counterpart and attempted to smooth the waters, the Jewish state's  weapons exports to Baku will be difficult to give up.

The diplomatic rift came shortly after press reports, based on data from flight tracing site Flightradar 24, cited the takeoff of an Azerbaijani cargo plane from  southern Israel.

The site said the aircraft, operated by Azerbaijani carrier Silk Way, took off from Ramon Airport, located near the Ovda military base, on the eve of the outbreak of hostilities.

Beyond this single example, Azerbaijan has a long track record of buying Israeli arms -- to the extent that Iran in 2012 summoned the former's ambassador to voice its concerns.

And while the Israeli defense ministry does not publish details of sales by country, Azerbaijani President Ilham Aliyev in 2016 said his country had bought $4.85 billion in defense equipment from the Jewish state (4.1 billion euros at current prices).

Israeli President Reuven Rivlin spoke on Monday with his Armenian counterpart Armen Sarkissian in a call that Rivlin's office said was at Sarkissian's request.

Rivlin "expressed his sorrow at the outbreak of violence... and at the loss of life on both sides" in Nagorno-Karabakh, his office said in a statement, adding that the Jewish state's long-standing relations with Azerbaijan are "not aimed against any side."

Rivlin said Israel was prepared to send Armenia humanitarian aid and expressed hope that the Armenian ambassador will return "soon".

In Jerusalem, Armenian flags appeared this week from windows in the Armenian quarter of the Old City.

According to data from the Stockholm International Peace Research Institute (Sipri), over the past five years, Israel has been the top supplier of arms to Azerbaijan, with sales of more than $740 million, putting it ahead of Russia.

"Azerbaijan is an important country for us," Efraim Inbar, president of the Jerusalem Institute for Strategy and Security, told AFP.

"We always try to be a good supplier even during times of tension... we have to make sure that we will honor the contracts we make with Azerbaijan," he added.

The ties between Israel and Azerbaijan date back to the break-up of the USSR in the early 1990s.

The two countries forged diplomatic and trade relations, as Israel sought to build bridges with Muslim countries and Azerbaijan was working to build new relationships beyond its traditional ties with Moscow.

"Israel imports quite a large amount of its oil from Azerbaijan and Israel exports to Azerbaijan weapons," she said. "Azerbaijan is one of the largest clients of Israel's defense industry."

Armenia also accuses Turkey, an ally of Azerbaijan, of supplying drones to Baku.

But that does not make Israel and Turkey allies.

The two are at odds over the Palestinian conflict, gas resources in the Mediterranean and the conflict in Libya.

Ankara has given military support to the U.N.-recognized Government of National Accord in Tripoli while Egypt, Saudi Arabia, the United Arab Emirates and Russia have favored eastern Libyan strongman Khalifa Haftar.

"We have seen Turkey increase (its influence) in Libya and this seems to be the manifestation of a more assertive military policy aimed at demonstrating the capabilities of its defense industry," says Lindenstrauss.

She says Ankara could be seeking "political leverage to cause Azerbaijan to rethink its relations with Israel."

At a time when Israel has normalized relations with several oil-producing Gulf countries who are potential customers of its military technologies, could the Jewish state cool its links with Azerbaijan?

Inbar says Israel does not want to build new relations with one Muslim country by sacrificing existing links with another.

The photo shows cook off of an Azeri tank, most probably hit by an ATGM.

Can't let a little thing like humanity get in the way of business... or oil.