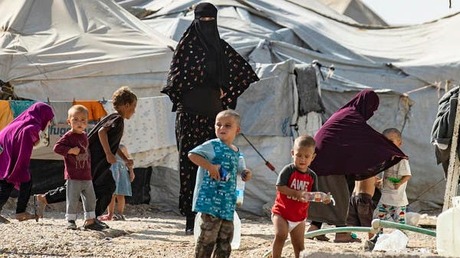 Syria's Kurds have agreed to allow thousands of Syrians including relatives of jihadists to leave a squalid and over-populated camp they administer, a top official said Monday.

"Syrian nationals will leave the Al-Hol camp and only foreigners will remain," said Riyad Derar, the co-chair of the Syrian Democratic Council, the political wing of the region's main military force.

"In Al-Hol, there are Syrian relatives of Islamic State group fighters and they too will be released" with guarantees from their families, Derar told AFP.

Syrian IS jihadists who are currently being held by Kurdish authorities in prisons in northeast Syria will not be included in the blanket release, the SDC official added, without providing a timeline.

The overcrowded Al-Hol camp is home to 64,377 people, including 24,300 Syrians who were either captured or displaced by fighting, according to the U.N. Office for the Coordination of Humanitarian Affairs (OCHA).

Iraqis make up the bulk of foreigners in Al-Hol which is also home to Western nationals many of them relatives of IS fighters.

Derar said Iraqis will be allowed to leave on a voluntary basis but he said that many wanted to remain in the camp over fears they would be imprisoned or tried in Iraq for alleged links to IS.

The Kurdish authorities' dwindling resources have complicated attempts to properly administer the camp's massive population, which aid groups say suffers from dire living conditions as well as medical and water shortages amid a coronavirus outbreak in the settlement.

Security has also been an issue in the camp which hosts IS sympathizers still loyal to the jihadist group even though it lost the last scrap of its proto-state across swathes of Syria and Iraq in eastern Syria last year.

"The Al-Hol camp is a big burden on the Kurdish administration," Derar said.

According to a July OCHA report, 4,345 Syrians have been released since June last year.