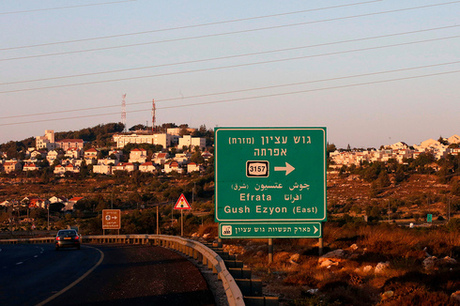 The latest approvals come less than a month after the United Arab Emirates and Bahrain signed agreements to normalize relations with Israel, which in return pledged to freeze its plans to annex swathes of the West Bank.

"These approvals make 2020 the highest year on record in terms of units in settlement plans promoted since Peace Now began recording in 2012," Peace Now said in a statement.

"The count so far is 12,159 units approved in 2020," it added, noting that the committee might hold another round of approvals before the end of the year.

"While de jure annexation may be suspended, the de facto annexation of settlement expansion is clearly continuing," Peace Now said.

"These recent approvals put to rest any speculation about a de facto settlement freeze."

U.N. Middle East envoy Nickolay Mladenov said the latest approvals were "of great concern to all those who remain committed to advancing Israeli-Palestinian peace," and "undermine the prospect of achieving a viable two-state solution."

"Settlement construction is illegal under international law and is one of the major obstacles to peace," he said in a statement, calling on Israel to immediately cease all settlement-related activities.

Yesha Council, which represents settlers throughout the West Bank, expressed "joy" over the approvals.

"Construction cannot be a bargaining chip in peace agreements or other issues," the organization said.

"Construction needs to freely continue in Judea, Samaria and the Jordan Valley, without conditions or diplomatic approval, like in the rest of the country," it said, using terms many in Israel use to refer to the West Bank.

The Palestinians and neighboring Jordan on Wednesday condemned the recent approvals.

But a controversial plan he unveiled in January gave U.S. blessing to Israeli annexation of large chunks of the West Bank, including the settlements, communities considered illegal under international law.

Israel agreed to delay those plans under its normalization deal with the UAE, something Emirati officials have cited in response to Arab and Muslim criticism.

The two Gulf countries were only the third and fourth Arab states to normalize relations with Israel, following Egypt in 1979 and Jordan in 1994, and Netanyahu has said he sees others following.

The Gulf agreements broke with years of Arab League policy on the Israeli-Palestinian conflict, which made its resolution a precondition for normalizing ties with Israel.

Excluding annexed east Jerusalem, more than 450,000 Israelis live in Jewish settlements in the occupied West Bank, alongside some 2.7 million Palestinians.