Azerbaijan Vows Retaliation for Deadly Strike on Civilians in Ganja 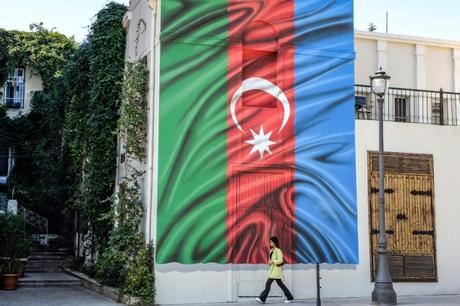 Azerbaijan's President Ilham Aliyev vowed on Saturday to take revenge on Armenia after a missile strike killed 12 sleeping people in the city of Ganja, a dramatic escalation in the conflict over the disputed Nagorno-Karabakh region.

The early hours attack, which also saw a strike on the nearby strategic city of Mingecevir, came hours after Azerbaijani forces shelled Stepanakert, the capital of the ethnic Armenian separatist region.

The explosions in Ganja levelled a row of houses and left at least 40 people injured in an attack Aliyev described as "a war crime".

In televised remarks, he said his army would "take revenge on the battlefield" and promised to capture Karabakh by driving out Armenian forces "like dogs".

As the sun rose over the devastation in Ganja, Mayil Shakhnazarov, 36, said it was impossible to identify some of those killed.

"What can we say? Our pain is deep. Really deep," he told AFP.

The seeming tit-fot-tat attacks further undermine international efforts to calm a resurgence of fighting between Christian Armenians and Muslim Azerbaijanis and avoid drawing regional powers Russia and Turkey into a conflict that has killed hundreds of people.

An AFP team in Ganja saw rows of houses in Ganja turned to rubble by the strike, which shattered walls and ripped roofs off buildings in the surrounding streets.

People ran outside in shock and tears, stumbling through dark muddy alleys in their slippers, some wearing bathroom robes and pyjamas.

- 'Everything shattered over us' -

The attack came six days after a missile struck another residential part of the city of more than 300,000 people, killing 10 civilians and leaving many on edge.

At the scene of the latest strike, Durdana Mammadova, 69, was standing on the street at daybreak because her house was destroyed.

"We were sleeping and suddenly we heard the blast. The door, glass, everything shattered over us," she said.

"There was smoke and dust -– we couldn't even breath."

Hikmat Hajiyev, an assistant to Aliyev, tweeted that according to initial information, more than 20 houses were destroyed in Ganja.

Nagorno-Karabakh's military said Azerbaijani forces had stepped up their attacks on Friday across the front, shelling Stepanakert and a nearby town.

AFP journalists in the city said strikes had hit the roof of a shopping centre, left a crater near a bus stop and shattered windows in a nearby residential building.

"What happened here is senseless,said Gayane Gharibyan, an angry 45-year Armenian woman whose husband was fighting at the front.

"How can the international community be so indifferent."

Turkey, a staunch ally of Azerbaijan widely accused of supplying mercenaries to bolster Baku's forces, said the strikes were a war crime and called on the international community to denounce them.

"Armenia continues to commit war crimes and massacre civilians. To remain silent in the face of this savagery is to be complicit in these crimes," Turkish Foreign Minister Mevlut Cavusoglu said on Twitter.

The Armenian defence ministry tweeted following the attack a list of what it described as "legitimate targets" in Ganja, including a special forces headquarters and an ammunitions factory.

At around the same time in the city of Mingecevir, an hour's drive north of Ganja, AFP heard the impact of a huge blast that shook buildings.

Mingecevir is protected by a missile defence system because it is home to a strategic dam.

The defence ministry said Mingecevir had come "under fire", but provided no other immediate details.

An Azerbaijani official said another missile hit a separate industrial district of Ganja at around the same time.

The decades-long Nagorno-Karabakh conflict re-erupted on September 27 and has so far killed more than 700 people, including nearly 80 civilians.

The mountainous western region of Azerbaijan has remained under separatist Armenian control since a 1994 ceasefire ended a brutal war that killed 30,000.

Armenia, which backs Nagorno-Karabakh but does not recognise its independence, has admitted that Azerbaijani forces have made important gains along the front in the past week.

An AFP team was taken by the Azerbaijani military on Friday to one settlement re-captured in the southern section of the conflict zone near the Iranian border.

Azerbaijani officials said they last controlled the settlement of Jabrayil, which includes strategic heights overlooking a fertile valley, during the post-Soviet war.

The current escalation is the deadliest and longest since that six-year conflict.