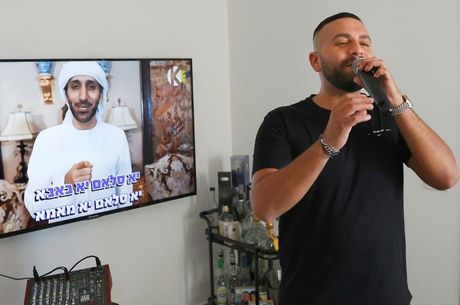 The scene cuts from Dubai to Tel Aviv, the lyrics switch from Arabic to Hebrew to English and the song is a slightly kitsch electro-pop duet by artists who, for now, remain apart.

The normalization of ties between Israel and the United Arab Emirates has produced its first musical collaboration: "Ahlan Bik", or "Hello you" in Arabic.

"This is a historic moment," said Israeli singer Elkana Marziano, whose duet with Emirati artist Walid Aljasim has clocked more than 1.1 million YouTube views since it was posted on September 30.

Marziano, 28, is a former winner of Israel's version of The Voice, a singing competition TV show, and an Arabic speaker influenced by the Mizrahi culture of Jews from the Arab world.

He told AFP that he and Aljasim had collaborated over the Zoom video-conferencing service, with some parts of the song recorded in Dubai and others in Israel.

"The understanding was immediate," Marziano said of the partnership.

One online commentator, who posted under the name Shaked Sharon, said: "With this song, you feel the new Middle East."

In August, Israel and the UAE announced that they had reached a U.S.-brokered deal to normalize ties, following years of discreet economic and security cooperation.

Israel's parliament, the Knesset, approved the UAE deal on Thursday.

Bahrain ultimately joined the pact known as the Abraham Accords signed at the White House last month, making it and the UAE the third a fourth Arab states to establish full diplomatic ties with Israel.

Israel signed a peace agreement with neighboring Egypt in 1979 and with Jordan in 1994.

The right-winger has insisted that more Arab states want ties with Israel even though its conflict with the Palestinians remains unresolved.

The UAE's Sheikh Mohammed bin Zayed Al-Nahyan has said the pact "opens the way to a new era of cooperation".

Palestinian leaders have condemned the deals and called on the Arab world to withhold establishing ties with Israel until it reaches a viable peace with the Palestinians.

While some YouTube commenters have celebrated "Ahlan Bik", others have condemned the song and Israeli-Emirati normaliئation, while calling for the creation of a Palestinian state.

The song was written by Doron Medalie, who also wrote "Toy", which won the 2018 Eurovision contest in Israel.

The chorus -- "I hear you friend far away, far away" -- is repeated in the three languages, while the music video's action pivots from Marziano dancing with friends in Israel to Aljasim in Dubai.

Marziano said that peace was a common theme in Israeli music, which has regularly been in conflict with its neighbors since its founding in 1948.

He said it was a "personal victory" to see young Israelis and Emiratis interacting online to discuss the song on his YouTube page, adding that he is planning a live concert with Aljasim when the coronavirus pandemic ends.

"I am very moved by the idea of singing this song, and others, on the same stage (with Aljasim)," Marziano told AFP.

Are they allowed to discuss Israel's killing of Palestinians, destroying their homes and farms, stealing their land, and building Jewish ONLY colonial settlements?

CRINGE. The UAE has embarassed itself to a point where it can't recover.

Th arabs have killed more people and destroyed more homes than any Israel has and will.