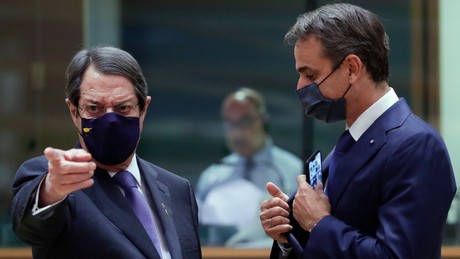 Cyprus President Nicos Anastasiades on Monday congratulated right-wing Turkish Cypriot nationalist Ersin Tatar on his election victory and called on him to back a new United Nations-led peace initiative.

Turkish Cypriots in the breakaway north of the divided island on Sunday narrowly elected Tatar, who was backed by Ankara, at a time of heightened tensions in the eastern Mediterranean.

"The verdict of our compatriots to elect Mr Ersin Tatar as the new leader of the Turkish Cypriot community is fully respected," said Greek Cypriot leader Anastasiades.

"I congratulate Mr Tatar and look forward to a familiarity meeting as soon as possible," he added in a statement.

Tatar, 60, clinched his surprise victory in a second round of presidential elections, winning 51.7 percent of the vote.

He edged out incumbent Turkish Cypriot leader Mustafa Akinci, 72, a supporter of reunification with the Greek Cypriot south of the divided island, leaving attempts to relaunch long-stalled UN-brokered talks hanging in the balance.

Cyprus has been divided since Turkey invaded and occupied its northern third in 1974 in reaction to a Greek-engineered coup aiming to annex the island.

Anastasiades said he was "ready and determined" to respond to UN Secretary General Antonio Guterres’ calls for a re-engagement in the peace process to ensure talks resume after a three-year hiatus.

"I want to hope that Mr Tatar shows the same willingness."

Guterres has said he will rekindle the peace process after elections in the north of Cyprus.

The last attempt at UN-mediated negotiations collapsed in Switzerland in July 2017.

Tatar is an advocate of a two-state solution and held the post of premier in the self-proclaimed Turkish Republic of Northern Cyprus (TRNC), recognised only by Ankara.

In a victory speech to hundreds of cheering and Turkish flag-waving supporters, Tatar thanked Turkey's head of state and said: "We deserve our sovereignty -- we are the voice of Turkish Cypriots."

Erdogan was swift to celebrate the victory, which followed a high 67 percent turnout at the polls.

Under Erdogan, Turkey has become an increasingly assertive regional power that is now engaged in a bitter dispute with Greece and Cyprus over oil and gas reserves in eastern Mediterranean waters.

The European Union has deplored Turkey's drilling for hydrocarbons in disputed waters and warned Ankara against further "provocations", while multiple countries have staged military drills in the region in recent months.

Earlier in October, Turkish troops angered the Republic of Cyprus by reopening public access to the fenced-off seaside ghost town of Varosha for the first time since Turkish forces invaded the north.

The reopening was announced jointly by Erdogan and Tatar at a meeting in Ankara, just days before the first round of polling.

It drew EU and UN criticism and sparked demonstrations in the Republic of Cyprus, which exercises its authority over the island's south, separated from the TRNC by a UN-patrolled buffer zone.