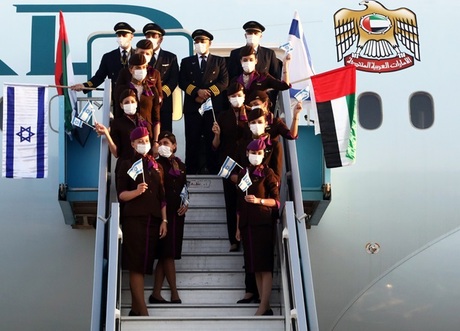 The first ever passenger flight from the United Arab Emirates to Israel landed near Tel Aviv on Monday, a month after the countries signed an agreement normalizing ties.

Etihad Airways flight EY 9607 from Abu Dhabi landed at Ben Gurion airport early in the morning with only crew on board, a spokeswoman for the Israel Airports Authority told AFP.

The plane picked up Israeli tourism professionals, who would be flying to the UAE for a two-day trip visit organized by Israeli company Maman Group, the spokeswoman said.

The UAE carrier said it had made "history".

"Etihad has become the first Gulf airline to operate a passenger flight to Israel. And this is only the beginning," the airline said on Twitter.

Etihad planes had landed in Ben Gurion with medical supplies in May and June to help the Palestinians cope with the coronavirus pandemic.

The Palestinians, who object the agreement Israel forged with the UAE, refused to receive the aid.

In August, Israel and the UAE announced that they had reached a U.S.-brokered deal to normalize ties, following years of discreet economic and security cooperation.

The UAE and Israel were due on Tuesday to sign an agreement to have 28 weekly commercial flights between the countries, a transportation ministry official said.

In Manama on Sunday, Israel and Bahrain signed a deal to establish relations, making the UAE and Bahrain only the third and fourth Arab states to normalize ties with Israel, following Israel's 1979 peace deal with Egypt and a 1994 pact with Jordan.

Peace with Israel is a different approach than the past. Will be interesting as more Arab countries normalise ties