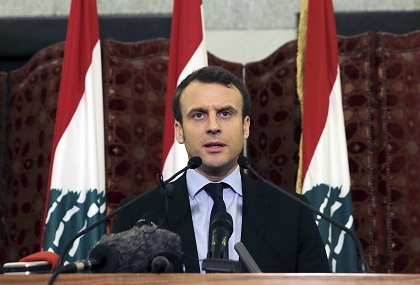 Lebanon is looking forward to its parliamentary consultations this week, meanwhile France continues to “send signals Lebanon’s way” urging a swift process of designating a new PM followed by a government formation in the crisis-hit country, al-Joumhouria daily reported on Tuesday.

According to the daily, Paris persisted in sending successive signals from within the French administration urging Lebanon’s political forces not to “waste time” and to conduct the consultations to assign a new prime minister for Lebanon so it could be followed by a government formation.

Lebanon is scheduled to hold binding parliamentary consultations on Thursday to choose a new prime minister. The prime minister designate will then line up a government.

Unnamed sources told the daily that French officials were “shocked” by the performance of some Lebanese leaders and how they broke the vows they made to France’s President Emmanuel Macron.

After the colossal August 4 Beirut port explosion, Macron gave Lebanon's political class four to six weeks to implement a roadmap, and said he would commit to holding a donor conference for Lebanon in October.

But Lebanese leaders did not commit to their vows. Macron accused them of “betraying” their promises over their failure to form a government in the wake of the Beirut port blast.

The sources assured that France has reiterated readiness to be “effectively present” to help Lebanon after the designation of a premier and forming a government.

The Islam rules in France... The French state is only bla bla, but know very well that without the money of the dogs that cut the head to teachers France enter in a big economic and social collapse... The whaabi Republic of france

Macron to the Lebanese politicians: Listen I don't want to be embarrassed on the global stage, see to it that asap a new government is formed, and once it's done, each one of you will get a substantial share of the oil project. My advice to Emmanuel..

Poor Frenchys trying to have a say on the world stage. You're too weak you let Hizbos bully you around. Go take care first of the Islamists that are being inside your own borders.

Want to help Lebanon. Here's a suggestion: Make Lebanon an overseas territory administered by an appointed French governor. Disband all political parties. Make all laws subject to French laws with a few exceptions, srcap the LLP and make the Euro the default currency.