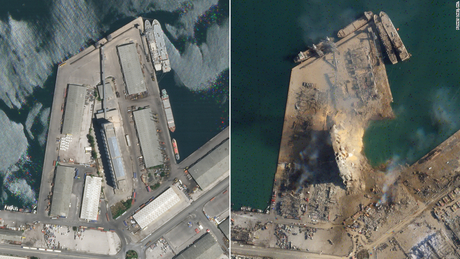 Caretaker Prime Minister Hassan Diab complained Tuesday that Lebanon has yet to receive satellite images from France and Italy as requested as part of a probe into the Beirut port explosion.

Diab told reporters during a briefing that he had called on French President Emmanuel Macron to provide satellite images of the port "before, during and after" the devastating August 4 explosion.

Authorities in Lebanon had also made the same appeal to Italy, the prime minister said, without specifying when the request was made or by whom.

Neither Paris nor Rome have publicly said they would provide the images.

"They should have provided us with the" satellite images "but that has not happened, and I don't know why," said Diab, who resigned in the wake of the blast.

Authorities say the explosion that killed around 200 people in Beirut was caused by a shipment of ammonium nitrate fertilizer that caught fire.

President Michel Aoun, however, has said that an "attack" could have been behind the tragedy.

Satellite imagery could help provide more details on one of the largest non-nuclear explosions in the world.

Lebanese officials have rejected an international probe despite demands both from home and abroad for an impartial investigation.

A local probe has yielded the arrest of at least 25 suspects, including the chief of the port and its customs director.

Lebanon's ruling elite, many of them warlords in the country's 1975-1990 civil war, had known for years that ammonium nitrate was stored in a destitute port warehouse without precautionary measures.

Their negligence and corruption is widely blamed for the disaster that wounded at least 6,500 people and displaced thousands more from their homes.