Chile: From Protests to Referendum 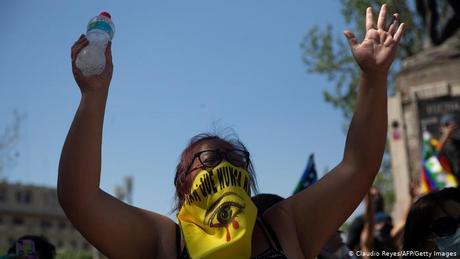 Chile's tumultuous protests about social inequality, which started a year ago, have left around 30 dead and led to a referendum set for October 25 to change the dictatorship-era constitution.

Here is a recap of key developments in the country's worst crisis since its return to democracy in 1990.

On October 18, 2019, protests in Chile's capital Santiago against a rise in metro fares escalate into clashes between police and demonstrators angry at high levels of social inequality.

The next day soldiers are deployed in the city for the first time since the end of the dictatorship of General Augusto Pinochet and a curfew is imposed as thousands bang pots and pans in the street.

As clashes, looting and vandalism continue in the capital, the state of emergency is extended to other regions.

As tensions ease, the nighttime curfew and state of emergency are lifted and Pinera reshuffles a third of his cabinet.

But the street movement continues.

In November Chile gives up on organizing an APEC summit, then in December the COP25 climate conference.

The central bank is later forced to twice inject billions of dollars to stop the fall of the peso.

In a breakthrough on November 15, lawmakers agree to a key opposition demand for a referendum on replacing the constitution.

On November 19, police suspend the use of ammunition which has led hundreds of people to suffer serious eye injuries.

In early December, the government presents a $5.5 billion social plan, and a month later the president announces a reform of the health system.

On December 13 the United Nations denounces multiple rights violations by the police.

After a period of calm punctuated by demonstrations every Friday in Santiago, new clashes in late January turn deadly, with four people killed.

Violence erupts again on February 23 at Vina del Mar near Valparaiso, and then in early March in several other towns.

The president announces a reform of the police.

On March 18, Chile decrees a "state of catastrophe" due to the pandemic. Protests are paused and the referendum, originally scheduled for April 26, is postponed to October 25.

The president carries out a fifth cabinet reshuffle.

In mid-August, Santiago starts loosening its coronavirus lockdown, a process which lasts until late September.

On October 2, a police officer shoves a 16-year-old protester off a bridge.

On October 18, tens of thousands of Chileans demonstrate on the first anniversary of the protests, in a day marked by clashes and the torching of two churches.