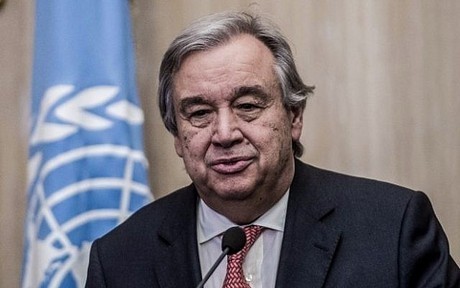 In his latest report on the implementation of Security Council Resolution 1559, Secretary-General Antonio Guterres called for "urgent reforms," an "end to corruption" and a “swift” formation of a government Lebanon, Asharq el-Awsat daily reported on Saturday.

Guterres warned in his 32nd semi-annual report that Hizbullah’s involvement in the Syrian war “poses risks to the stability of Lebanon and the region.” He urged “regional countries,” in reference to Iran, to "encourage" the transformation of Hizbullah into a "civil political party, and to disarm it.”

“It demonstrates the failure of Hizbullah to disarm and its refusal to be held accountable to the state institutions,” he said, calling on Hizbullah and other concerned parties "not to engage in any military activity inside or outside Lebanon.

Guterres also reiterated calls on Israel to “commit to its obligations under UN Security Council resolutions, and ro withdraw its forces from the northern part of Ghajar and an adjacent area north of the Blue Line.”

On the massive Beirut port explosion that fattened large parts of the capital, Guterres urged “transparent and credible” investigation.

He also urged authorities to carry out swift reforms and put an end to corruption.

Excuse me, but how could this be "his 32nd semi-annual report" as he only became Sec-Gen in October 2016?

Wishful thinking, most unfortunately. Only Iran can order Hizbullah to disarm and to date, not ready to do so.

I have been saying so forever. The head of the snake is in Tehran, and only they the take back Hizbos arms. After all it's their arms isn't it.