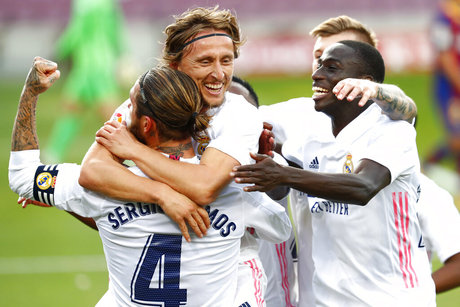 Real Madrid triumphed in the Clasico, Robert Lewandowski kept up his stunning form and Ajax recorded the biggest victory in the history of the Dutch top flight.

Below are some of the main talking points from the weekend's action across the continent:

Rarely in recent years have both Barcelona and Real Madrid come into a Clasico at such a low ebb, but it was Zinedine Zidane's team who emerged from their own mini-crisis with a fine 3-1 win at an empty Camp Nou.

Not for the first time in this fixture there was controversy, with the decision to award Real a crucial second-half penalty leaving Barcelona coach Ronald Koeman furious with the VAR.

Sergio Ramos's spot-kick put the visitors 2-1 up and Luka Modric went on to wrap up the win which saw Real bounce back from suffering consecutive defeats in the week leading up to the game.

They have now lost just once in eight trips to the Camp Nou and the result relieves the pressure on Zidane, while leaving Koeman under the cosh. That is two straight La Liga losses now for Barca, the first time that has happened since April 2016. They are 12th in the table.

- Another record for Lewandowski -

Robert Lewandowski's sensational start to this season continued as he bagged a hat-trick in Bayern Munich's 5-0 demolition of Eintracht Frankfurt.

The Polish striker has 10 goals already and is the first to reach that mark after just five matches of a Bundesliga campaign.

It was a perfect hat-trick, with Lewandowski scoring one each with his left foot, right foot and head. At 32 he is in the form of his life, having scored 55 times in total last season as Bayern won the treble.

Those who thought record wins and double-figure scorelines belonged to the 1930s can think again. On Saturday Ajax set the all-time mark for the biggest victory in the Dutch Eredivisie as they crushed hapless VVV Venlo 13-0 away.

Lassina Traore struck five times as the Amsterdam club outdid Johan Cruyff's Ajax, whose 12-1 win over Vitesse Arnhem had stood as the top flight's record win since May 1972 -- the season they won the league title and the second of their four European Cups.

Traore, the 19-year-old from Burkina Faso, became the first Ajax player to score five in an Eredivisie game since Marco van Basten in 1985.

"We were hungry in the field. We wanted to score goals, and I'm fine with that," said Ajax coach Erik ten Hag, whose team now go to Atalanta in the Champions League.

Juventus have now drawn the last three Serie A games they have actually played, leaving aside the 3-0 win they were awarded when Napoli did not turn up for their recent match in Turin due to a coronavirus outbreak.

On Sunday Andrea Pirlo's team needed Dejan Kulusevski to come off the bench and salvage a 1-1 draw at home to Verona as the reigning champions again had to do without Cristiano Ronaldo following a positive Covid-19 test.

"We could have done better," admitted novice coach Pirlo, whose side may have their work cut out if they are to win a 10th straight Scudetto with a resurgent AC Milan joining the likes of Inter and Atalanta in hoping to knock the Old Lady off her perch.

Now Juve host Barcelona in the Champions League looking to build on the one victory they have enjoyed in recent weeks, away at Dynamo Kiev.

They were supposed to leave Lyon before the transfer window closed but both saw moves away from the French club fall through.

Memphis Depay had hoped to join his former Netherlands boss Ronald Koeman at Barcelona while Houssem Aouar might have left his boyhood club for Arsenal, but instead they remain with last season's Champions League semi-finalists, who are not in Europe at all in this campaign.

It hs been a slow start for OL but on Sunday they trounced Monaco 4-1 to go sixth in Ligue 1, with Depay opening the scoring and Aouar netting a penalty. Karl Toko Ekambi got their other two goals.