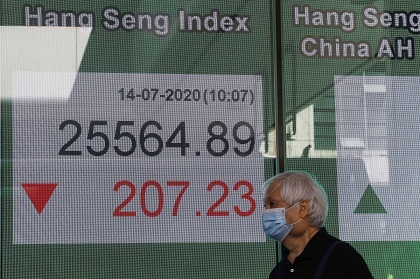 Eurozone banks tightened their requirements for handing out loans in the third quarter, a European Central Bank survey showed Tuesday, indicating nervousness over the region's recovery as coronavirus infections spike.

Credit standards -- the yardstick that banks use to approve loans to companies and consumers -- got stricter in the three months to the end of September, as institutions cited the "deterioration of the economic outlook and worsened creditworthiness of consumers affected by the pandemic".

Credit conditions tightened for firms and consumers in Spain particularly, where restrictions on travel hit the key tourism and services industry hard, while Germany and France also saw heightened constraints on lending.

An upswing in economic sentiment after pandemic-induced lockdowns in the spring has faded after businesses opened up over the summer months, with countries across the 19-nation single currency club now reintroducing restrictions to curb a second wave of the virus.

Demand for loans also fell from all-time highs in the third quarter as firms needed less emergency liquidity compared with earlier in the year.

The survey comes ahead of a key ECB meeting on Thursday when the Frankfurt-based institution is expected to hint at more monetary stimulus to come to shore up the eurozone economy.

Banks expect credit standards to continue to tighten in the fourth quarter, "reflecting concerns around the economic recovery... as well as uncertainties around the prolongation of fiscal support measures," the central bank said.

ECB President Christine Lagarde has urged eurozone governments not to pull away fiscal support too quickly -- including furlough or short-time work schemes -- so as to prevent a "cliff effect".