A Month of Fighting in Disputed Nagorno-Karabakh 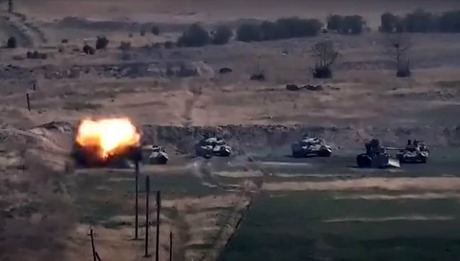 Nagorno-Karabakh, a breakaway region of Azerbaijan mainly inhabited by ethnic Armenians and backed by Yerevan, has been the scene of deadly clashes for the past month.

Here is a timeline:

Armenia and Azerbaijan, two former Soviet republics in the Caucasus, have accused each other of initiating deadly clashes that broke out on September 27 in their decades-long territorial dispute.

Ethnic Armenian separatists seized the Nagorno-Karabakh region from Baku in a 1990s war that claimed 30,000 lives. Since then, clashes have occurred repeatedly.

Azerbaijan's defence ministry says it launched a "counter-offensive" to protect the population, while separatist authorities claim the troops bombed the regional capital Stepanakert.

Turkish President Recep Tayyip Erdogan, a firm supporter of Azerbaijan, on September 28 calls on Armenia to end its "occupation" of Nagorno-Karabakh.

The next day Armenia says a Turkish F-16 fighter jet that took off from Azerbaijan shot down an Armenian warplane.

Turkey denies the claim. Moscow, which has a military alliance with Yerevan, urges Ankara not to "add fuel to the flames" by encouraging Baku's campaign.

The United Nations Security Council unanimously calls on both sides to stop fighting.

On September 30, Russia says fighters from Syria and Libya are being deployed to the conflict.

Azerbaijan's leader vows to pursue military action until a full Armenian withdrawal from the disputed territory.

On October 1, the presidents of France, Russia, and the US call for a ceasefire.

Armenia expresses readiness to work with international mediators to reach a ceasefire with Azerbaijan.

On October 4, fighting intensifies, with Stepanakert and Ganja in western Azerbaijan under fire.

On October 6, Armenia's Pashinyan says Turkey's encouragement of Azerbaijan is to blame for the outbreak of fighting and is confident of Russian support.

The following day, separatist authorities say half of the enclave's 140,000 inhabitants have been displaced.

On October 8, the Ghazanchetsots (Holy Saviour) Cathedral, an iconic site for the Armenian Apostolic Church in Karabakh, is bombed.

On October 10, after Russia-mediated talks, Armenia and Azerbaijan announce a ceasefire, but it is broken as soon as it takes effect, both sides blaming each other.

On October 14, the Azerbaijan army says it hit missile launch sites in Armenia.

Yerevan says it "reserves" the right to hit any infrastructure or military site anywhere in Azerbaijan.

Turkey's president denies any pro-Turkish Syrian forces are engaged in the conflict.

Two days later, Azerbaijan vows to avenge the deaths of 13 civilians in an overnight missile strike on Ganja. Armenian separatists justify their riposte by accusing Baku of targeting civilian infrastructure.

On October 18 a new humanitarian truce is immediately breached. Armenia and Azerbaijan again blame each other.

After the UN Security Council calls for respect of a ceasefire, Armenia's prime minister on October 21 rules out a diplomatic solution.

The following day Putin says the death toll in more than three weeks of fighting is "nearing 5,000". The officially confirmed number of fatalities remains below one thousand.

On October 26, a third ceasefire collapses and Armenia and Azerbaijan trade accusations of violating it within minutes of it coming into force.