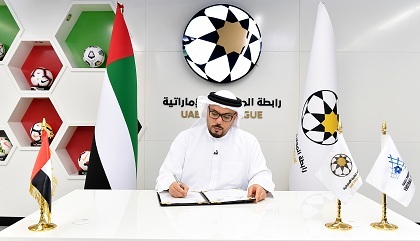 Football leagues from the United Arab Emirates and Israel signed a cooperation agreement, the first such deal between an Arab country and the Jewish state, the clubs announced Tuesday.

The memorandum of understanding (MoU) comes after UAE in September became the first Gulf nation and third Arab state to officially establish relations with Israel, following Egypt in 1979 and Jordan in 1994.

"The terms of the MoU include holding joint workshops to discuss ways to develop the marketing and promotional side of the competitions, in addition to keeping pace with everything related to sports and football development technology, as well as developing the technical aspect in the football sector," the UAE Pro League said in a statement.

The announcement comes after Al-Nasr club of Dubai, one of the seven emirates that make up the UAE, for the first time signed an Israeli footballer, Diaa Sabia.

The agreement, signed on Monday, "will contribute towards the promotion of peace and strengthen cooperation and friendship in a way that serves the interest of football in both countries", said Abdulla Naser al-Junaibi, chairman of the UAE Pro League, according to the statement.

"We hope that soon we will have the opportunity to continue to forge collaborations in the field of football with our other neighbours as well," he said, according to the statement.