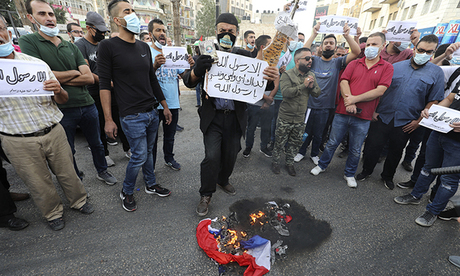 France urged its citizens Tuesday to be cautious and avoid mass gatherings in countries that have announced boycotts of French products in a fast-spreading protest against perceived anti-Muslim bias from Paris.

Muslims have reacted angrily to President Emmanuel Macron's staunch defense of the right to mock religion following the beheading of a history teacher who had shown his pupils cartoons of the Prophet Mohamed during a class discussion on free speech.

Tens of thousands marched Tuesday in the Bangladesh capital Dhaka, while in Syria protesters have burnt pictures of Macron and in Libya they torched French flags.

"In several countries in recent days, there have been calls for a boycott of French products, particularly foodstuff, and more generally calls to protest against France," the French foreign ministry said on its website.

"It is advisable to avoid areas where demonstrations are held, to stay away from gatherings, and to follow the guidance of the relevant French embassy or consulate," it added.

"It is recommended to be most vigilant, especially when traveling, and in places frequented by tourists and expatriate communities."

Depictions of the Prophet Mohammed are considered offensive by many Muslims, but in France such cartoons have become synonymous with freedom of expression and a proud secular tradition dating back to the Revolution.

In the aftermath of teacher Samuel Paty's murder, Macron vowed the country "will not give up cartoons."

Publication of the same drawings had sparked the 2015 massacre of cartoonists and others at the satirical magazine Charlie Hebdo, the beginning of a spate of deadly terror attacks on French soil.

Earlier this month, Macron had unveiled a plan to defend France's secular values against a trend of "Islamist separatism," and described Islam as a religion "in crisis."

When will the reliogus people stop getting upset anytime someone disagrees with them? If you are a truly devoit person and nothing can shake your belief then why do you care if someone else says your God is short or tall or heavyset? If you truly beleive in your God then no one can change your vision of him or her.

I wonder sometimes if people are truly convinced in their beliefs...

France warns the French citizens to protect they heads...this Mecas are so sweet... The guy that cut the head to the French teacher is mártir in the Islamic world...west must open the eyes about the Islamics...