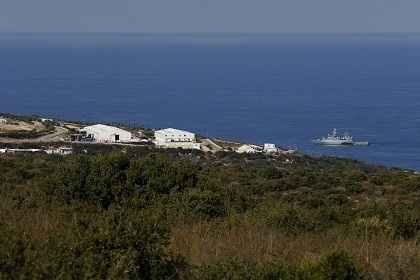 The second round of US-mediated sea border talks between Lebanon and Israel launched on Wednesday at the UNIFIL headquarters in Naqoura under UN and US auspices.

John Desrocher‏, the US ambassador and mediator is to lead the US delegation, while US envoy David Schenker, who facilitated the opening of the first session, may not attend, said al-Joumhouria daily.

It said the representative of the Secretary-General of the United Nations, Jan Kubis, would not lead the UN delegation, and that he assigned one of his senior aides who took part to his side in the first session.

‏According to the daily, commander of the international forces operating in the south (UNIFIL), General Staffan Del Col, will "chair the negotiation session and distribute the roles and interventions during the session."

Wednesday’s round was scheduled earlier this week but was postponed for “technical” reasons.

Israel announced that a delegation will leave Wednesday morning for Naqoura to partake in the second round of maritime border talks between Israel and Lebanon, reported the daily.

Lebanon and Israel are still technically at war and with no diplomatic ties.

The talks, expected to last for two days, were held at the headquarters of UN peacekeeping force UNIFIL in the Lebanese border town of Naqoura, guarded by army roadblocks and with UN helicopters circling above.

After years of quiet US shuttle diplomacy, Lebanon and Israel this month said they had agreed to begin the negotiations in what Washington hailed as a "historic" agreement.

The announcement came weeks after Bahrain and the United Arab Emirates became the first Arab nations to establish relations with Israel since Egypt in 1979 and Jordan in 1994.

Lebanon -- which last saw military clashes with Israel in 2006 -- insists that the negotiations are purely technical and don't involve any soft political normalisation with Israel.

Lebanon, mired in its worst economic crisis since the 1975-1990 civil war, is looking to settle the maritime border dispute so it can press on with its offshore quest for oil and gas.

The search for hydrocarbons has already heightened tensions in the eastern Mediterranean following repeated Turkish exploration and drilling operations in waters claimed by both Cyprus and Greece.

In February 2018, Lebanon signed its first contract for drilling in two blocks in the Mediterranean with a consortium comprising energy giants Total, ENI and Novatek.

Exploration of one of the blocks is more controversial as part of it is located in an 860-square-kilometre (330-square-mile) area claimed by both Israel and Lebanon.

The energy expert explained that Lebanese negotiators will likely try to claim areas that fall beyond the disputed 860 square kilometres zone, including the Karish gas field currently operated by Israel, she told AFP.

"We have to wait to see the reaction of the Israelis," she said.

While the US-brokered talks look at the maritime border, a UNIFIL-sponsored track is also due to address outstanding land border disputes.

"We have a unique opportunity to make substantial progress on contentious issues along" the border, UNIFIL head Major General Stefano Del Col said in a statement on Tuesday.

The meetings have raised faint hopes for a thaw between the neighbours who have repeatedly clashed on the battlefield.

The Israeli defence minister and alternate prime minister, Benny Gantz, said on Tuesday he was "hearing positive voices coming out of Lebanon, who are even talking about peace with Israel".

Gantz, speaking during a tour of northern Israel, did not specify which Lebanese comments he was referring to.

But they came a day after Claudine Aoun, daughter of Lebanese President Michel Aoun, told Al Jadeed TV that peace with Israel would be conceivable if outstanding issues were resolved.

"We have the maritime border dispute, the issue of Palestinian refugees, and another topic which is more important, which is the issue of natural resources: water, oil and natural gas which Lebanon is depending on to advance its economy," she said.

When asked directly if she would object to a peace treaty with Israel, she responded: "Why would I object?"

"Are we supposed to stay in a state of war? ... I don't have doctrinal differences with anyone ... I have political differences."

Israel and Hizbullah last fought a war in 2006, and both sides still exchange sporadic cross-border fire.