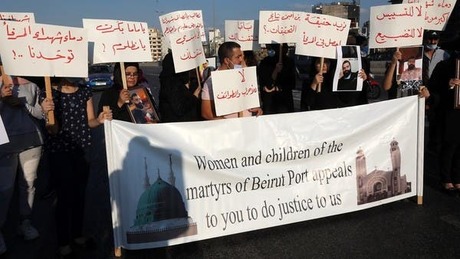 The explosion of a massive stockpile of ammonium nitrate in a dockside warehouse killed more than 200 people, wounded thousands and ravaged swathes of the capital Beirut.

"We presented 679 complaints today, in the name of the families of those killed, wounded and affected," Bar Association head Melhem Khalaf said, according to the NNA.

"We cannot stop until a verdict is pronounced," Khalaf said, calling the blast "a horrific catastrophe."

It was the first wave of complaints to be filed of around 1,400 cases being compiled by the Bar Association.

"We need to go deep with the ongoing investigations," Khalaf added.

The blast was the country's worst peacetime disaster.

It reignited popular outrage against the political class, after it emerged officials had known the ammonium nitrate had been stored unsafely at the port for years.

Lebanese officials have rejected an international probe, despite demands both from home and abroad for an impartial investigation.

A local investigation has led to the arrest of at least 25 suspects, including the chief of the port and its customs director.

Experts from France and the US Federal Bureau of Investigation took part in the preliminary investigation.

A judicial source told AFP that Lebanon had received the report from the American experts, and was expecting one from France within the next two weeks.

"Much hinges on the French report to determine the causes of the explosion," the source said.

According to Khalaf, the FBI report relies on information from the Lebanese agencies, whereas the French one will draw on "the results of laboratory tests".

Lebanon has complained it has yet to receive satellite images of the port before, during and after the blast that it requested from France and Italy.

The entire government knew about this unsafe storage (13 years) after they seized that ship. It was being kept for Hezbollah's use. Lebanon was warned many times by both world leaders and the Arab League not to get involved with Hezbollah but they didn't listen. Now they are paying the price. The truth will be hidden about this blast as that is what corrupt governments and terrorists do.