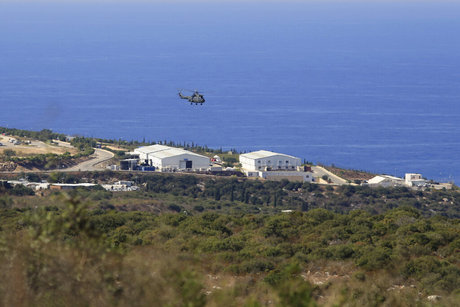 The atmosphere of the third round of Lebanese-Israeli talks over the demarcation of their maritime border was “negative,” Lebanese TV networks reported on Thursday.

“No progress was made, amid escalation by each of the negotiating parties, and the dispute is revolving around the point from which demarcation should begin,” al-Jadeed TV said.

MTV meanwhile reported that there are “divergent viewpoints and stubbornness in the stances of the Lebanese and Israeli delegations over two key issues, one of them is the land point” from which demarcation should begin.

The TV network added that the the next round of negotiations will be held on November 11.

The talks are being held under U.N. and U.S. auspices to allow for offshore energy exploration.

Lebanon's official delegation, led by the army, had no immediate comment. After nearly four hours of talks, the delegation went to brief President Michel Aoun.

Lebanon's National News Agency said the Lebanese delegation carried with it "maps and documents showing the points of contention and the Israeli enemy infringing on the Lebanese right to include part of Block 9."

Lebanon brought new maps to the talks, pushing for what local media and experts called a "maximalist stance" aimed at rectifying previous positions that pushed for a smaller area to be part of the country's territorial waters.

Lebanese and Israeli officials have declined to comment on the secret, indirect talks. But Lebanese media, quoting informed officials, said the government is pushing for new maps to demarcate disputed maritime borders that involve potentially lucrative oil and gas deals.

The Lebanese delegation -- a mix of army generals and professionals -- offered a new map Wednesday that pushes for an additional 1,430 square kilometers.

This area is to be included in Lebanese territory on top of the already disputed 860 square kilometer-area of the Mediterranean Sea that each side claims is within their own exclusive economic zones, according to local media.

The Israeli official said the negotiations should be on the lines previously submitted by the two countries to the U.N. The official spoke on condition of anonymity because they were not authorized to speak to the media.

Laury Haytayan, a Lebanese oil and gas expert, said members of the Lebanese delegation have been known to adopt the maximalist approach that sought to rectify Lebanon's previous positions on where to draw the maritime border.

The new pitch is based on adopting the same starting line as that set in 1923 between British Mandate over Palestine and French Mandate over Lebanon as the demarcation line, instead of the 1949 Armistice Agreement between Lebanon and Israel. It is also including new areas, ignoring claims by Israel to reefs there.

With the new claim, Lebanon is aggressively seeking to change the starting approach to the talks, she said.

Thursday's meeting included a lunch hosted by the United Nations in a tent on the edge of the Lebanese border town of Naqoura, according to Lebanon's LBCI TV station. It said there were no direct talks between the two delegations during the lunch. During the opening ceremony, the Lebanese delegation did not attend lunch and refused to appear in a joint photo with the Israeli team and the U.S. and U.N.

The talks are held amid tight security, including patrols by U.N. peacekeepers, Lebanese army patrols and Israeli navy ships.

After years of quiet U.S. shuttle diplomacy, Lebanon and Israel this month said they had agreed to begin the negotiations in what Washington hailed as a "historic" agreement.

The announcement came weeks after Bahrain and the United Arab Emirates became the first Arab nations to establish relations with Israel since Egypt in 1979 and Jordan in 1994.

But Lebanon has insisted the negotiations are purely technical and do not involve any political normalization with Israel.

Lebanon, reeling from its worst economic crisis in decades, is hoping to settle the maritime border dispute so it can continue exploring for hydrocarbon reserves in the Mediterranean.

Exploration is on hold in an area off its coast named Block 9, as a section of it is located in an 860-square-kilometer area claimed by both Israel and Lebanon.

In February 2018, Lebanon signed its first contract for offshore drilling for oil and gas in Block 9 and Block 4 with a consortium comprising energy giants Total, ENI and Novatek.

Lebanon in April said initial drilling in Block 4 had shown traces of gas but no commercially viable reserves.

While the U.S.-brokered talks look at the maritime border, a UNIFIL-sponsored track is also due to address outstanding land border disputes.

Well, in my and everybody else`s account this was the second round of sea border talks

This article was written by Michel Hayek LOL

Why "negative" ?
Because Lebanon has decided to enlarge the area (860 sq. kms) that it has claimed for over 10 years and were the basis for these discussions. It now wants to discuss an area of 2490 sq kms.
What would Lebanon do if Israel did the same thing and stated that it was willing to only discuss say only 350 sq kms for example. Of course Lebanon would disagree.