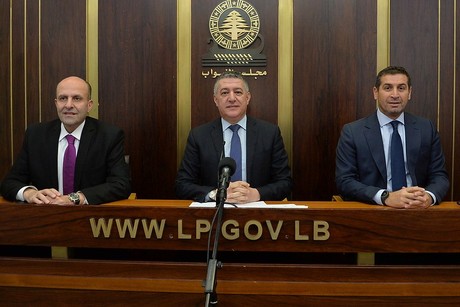 The Free Patriotic Movement-led Strong Lebanon bloc on Friday submitted a draft law aimed at setting deadlines for the president of the republic to call for binding parliamentary consultations to name a new PM and for the PM-designate to form a government.

The bill, presented by MPs George Atallah, Eddy Maalouf and Salim Aoun, calls for amending Article 53 (Clause 3) and Article 64 (Clause 2) of the Constitution.

If passed, the bill would grant the president a one-month deadline to call for consultations and the PM-designate a similar deadline to form a government.

“This would spare us the futile political debate and the remarks about infringement on jurisdiction and the violation of the constitution,” Atallah said at a press conference.

“Most of the time, the formation process protracts, to the extent that a caretaker cabinet would remain in place for a period longer than the one it served as an incumbent cabinet,” the MP noted.

He said the proposed amendments aim to make texts a source for finding solutions rather than generating problems.

“It would completely rid us of procrastination… and would push the PM-designate to perform his job seriously and commit to consulting with all the relevant parties,” Atallah went on to say.

can you please explain the strength of Lebanon?