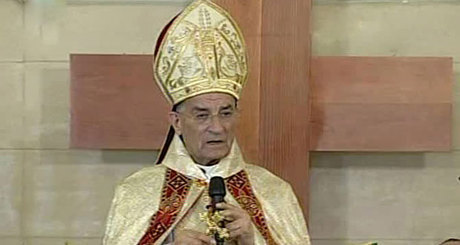 In his fiercest verbal attack at officials, Maronite Patriarch Beshara al-Rahi snapped at them on Saturday urging them to “step down,” saying Lebanon's “political authority has murdered its people.”

“The political authority has murdered its people and it must admit its failure to represent citizens and manage the country,” said Rahi.

His remarks came in a sermon at the conclusion of the Holy Synod of the Bishops of the Maronite Church in Bkirki.

“The authority has killed its people economically, financially, and in terms of living and development. It thrust them into a state of loss, anger, despair, revolution, emigration and survival,” stated the Patriarch.

Rahi urged the “political group” to “admit its failure in gaining the people's trust and in managing the country.”

He said it should “step down for the sake of Lebanon, even if only temporarily, to pave way for a unified government team to lead the country towards the path of advancement.”

God bless Maronite Patriarch Beshara al-Rahi for supporting our shia resistance and for snapping at officials for murdering their people and for failing in gaining people's trust.

Not to mention you gave your blessing to the majority of them....

When he says "its people" he's referring to the 30% who are Christian (can you be a demographic Christian?) who by the National Pact got seats in the Chamber of Deputies in a 6:5 proportion to non-Christians and who by their concession in the Taef Accord, enshrined in Constitutional Article 24, receive half the seats now. He has called this "equality" in the past. It is why Lebanon is paralyzed.

Change will only come by force. They don't want to change, they do nothing. The only way to achieve change is to forcefully remove them. And throw them all in jail or murder them. This is how the revolution should be... No revolution without blood... expecting the same POS to fix things is a joke.