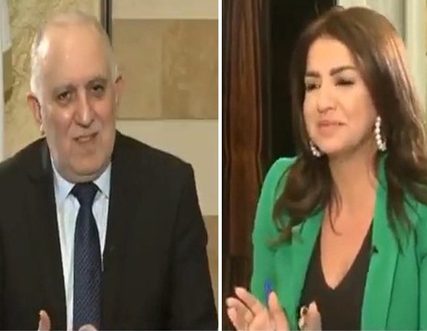 Lebanese have poked fun at caretaker Interior Minister Mohammed Fahmi after he suggested the solution to a ban on deliveries during a coronavirus lockdown was for women to start cooking.

Lebanon started a two-week partial lockdown on Saturday to try to stem the spread of the Covid-19 virus as cases topped 100,000 and intensive care hospital departments became overwhelmed.

When a journalist asked Fahmi what Lebanese should do on Sunday when a day-long curfew suspended popular food deliveries from restaurants and supermarkets, he quipped: "Let women cook a little."

Appalled women reacted by lambasting the minister's sexist comment on social media, and vowing they were #Not_cooking_on_Sunday.

"I will cook happily the day they pick up and recycle garbage," she added, referring to oft-criticized public services.

Award-winning journalist Dalal Mawad slammed what she called a "sample of the level of discourse and awareness among this country's politicians."

Lebanese men joined in posting images of themselves dicing up vegetables or shaking pans on the stove, as they took on the #Fahmi_challenge -- to be a man and cook.

"I apologize, honorable minister, that today I cooked for my sons," one user, a divorced man raising his sons on his own, wrote beside a picture of him serving a meal on Facebook.

"I apologize because their mother is a doctor like me and the head of a department in France, and I and my children are very proud of her."

Lebanon is also reeling from a devastating blast at Beirut's port in August that killed more than 200 people, and a raging economic crisis that sparked mass protests last fall against entrenched politicians viewed as incompetent and out of touch.

"Gender equality Mr. Fahmi, have you ever heard about it? Or too busy ruining our country with your bunch of friends?," wrote another Lebanese man on Facebook in English.

Another one made a video to the tune of the "Mission: Impossible" soundtrack, encouraging others to follow suit, and finishing with the revelation: "Men... also do the washing up."

I watched the interview and I don't believe he meant anything by it. The media is blowing it out of proportion.

the Husband of Margaret Thatcher was asked once by a journalist: who wears the pants at home, you or Mrs Thatcher?
He answered: Of course I do , I even wash and iron them....

So Fahmi ...check the users manual of the washing machine

Absolutely in a nation where the normaly household cannot afford to eat, a maid is a necessity and not just a must! These ladies forget what their grandmothers did? was that bad or did that stop them from becoming the next Madam Curie? I dont know this minister from Shinola but there was nothing derogotary or sexist in what he said, remember Lebanon's society norms is that both men and woman work in this world, just a man is expected to fix the "car" and a women is to feeding a child.

I haven't seen the clip and don't know the full story but yes its an offensive thing to say especially since both men and women are at home so why single out the women for cooking as if the men are out doing hard work? Men need to stop being arrogant.