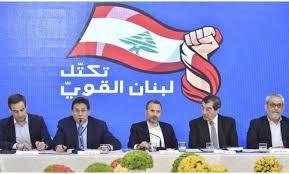 The Strong Lebanon parliamentary bloc on Tuesday decried that some parties are seeking a return to “the era of elimination and marginalization.”

“A government of speciality, expertise and competency cannot work and make achievements without the principle of preserving national balance, which cannot be disregarded or relinquished,” the bloc warned in a statement issue after an e-meeting chaired by FPM chief MP Jebran Bassil.

“There are confirmed and alarming indications about the desire of some parties to go back 15 years in time to the era of elimination and marginalization, which is something that contradicts with the path of national stability,” the bloc cautioned.

It also called for “speeding up the formation of a salvation government that would implement the reformist clauses of the French initiative and immunize stability and national solidarity in a period that is among the most dangerous periods that the Middle East region has witnessed.”

The bloc also said that its “facilitating stance” stems from “its awareness of the gravity of the situation,” while urging “unified standards in the cabinet formation process” to secure “the broadest possible parliamentary, political and popular support” for the new government.

They are the curse of Lebanon!

“A government of speciality, expertise and competency cannot work and make achievements without the principle of preserving national balance, which cannot be disregarded or relinquished,” the bloc warned in a statement issue after an e-meeting chaired by FPM chief MP Jebran Bassil.

The so called " national balance" is an artificially created agreement , it is time to get rid of it if we talk about reforms; when I hear/read it I have to think of the term "collateral damage", a fancy word used by people to hide their vicious agenda

I’m sick and tired of these Iranian–controlled puppets looting Lebanon since 2005! These horrible people should serve life in Roumieh !

Where is the corona virus when you need it... 5 useless, incompetent and corrupted clowns... They are a waste of oxygen...

These guys are CLUELESS and should be calling themselves the strong kizb bloc. We need people that know what they are doing not people who are put into those positions as favors. I guess they want to protect corruption and those who are corrupt. Look at who chaired the meeting.

of any time to need an assassination, bomb or other destructive event this would have been it. What a waste of hot air and waste of oxygen those beings are. Absolute filth and the destruction of Lebanon. Makes me want to be sick.