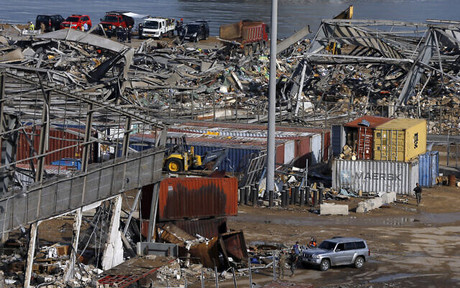 Lebanon has signed a deal with a German company to dispose of 49 containers of flammable chemicals from Beirut's port, months after a deadly and devastating blast, officials said Thursday.

Combi Lift, a German a heavy lift transport company that was already working in the port, started clearing the containers soon after the contract was signed on November 11, the prime minister's office told AFP.

The containers, which include corrosive acids, have been stored in an open-air cargo zone for over a decade under the supervision of Lebanon's customs authority, a spokesperson said.

Combi Lift will ship the chemicals in special containers as part of a $3.6 million deal, with the port authority reportedly to pay $2 million of that.

Interim port chief Bassem al-Kaissi said that removing the chemicals was a necessary "preemptive step," warning that if they caught fire "Beirut will be wiped out".

The containers sparked concern after the mammoth August 4 disaster -- Lebanon's worst in peace-time -- killed more than 200 people, injured at least 6,500 others and ruined swathes of the capital.

Authorities say the blast was caused by a shipment of ammonium nitrate fertiliser that caught fire, years after it was impounded at the port.

Over 4 months and such containers still exist! I wonder which 3rd world country will be receiving this polluted shipment