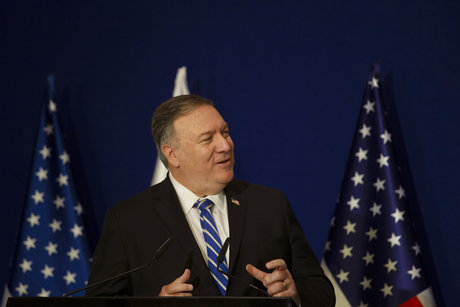 U.S. Secretary of State Mike Pompeo has reiterated Washington’s support for the ongoing negotiations between Lebanon and Israel over the demarcation of their maritime border.

Speaking after talks with Israeli Prime Minister Benjamin Netanyahu in Jerusalem, Pompeo said he conveyed to Israel’s premier his country’s “support for the decision by the Governments of Israel and Lebanon to begin discussions on the maritime boundary,” for which the U.S. is acting as a mediator and facilitator.

“We hope that this long-standing dispute can be resolved. The negotiation has the potential to yield increased stability, security, and prosperity for both Israeli citizens and those in Lebanon as well,” he added.

Separately, Pompeo commented on the role of the United Nations peacekeeping force in south Lebanon.

“In August of this year, the U.S. supported the renewal of the UNIFIL mission, but we demanded some important conditions, and for good reason. For far too long, Hizbullah has enjoyed near-total freedom of movement through UNIFIL’s mandated areas of control, and with Iran’s support, has built up an arsenal of weapons, fired missiles into Israel, dug attack tunnels underneath the Lebanon-Israel border, and more,” Pompeo said.

“The United States cannot abide by these actions against our trusted friend. The most recent renewal of the mandate included new reporting requirements on those attacks against peacekeepers and investigations of access denials,” he added.

“We are hopeful that these important steps will ensure UNIFIL can be a multilateral mission that actually fulfills its mandate. If not, we’ll have to move in a different direction,” Pompeo went on to say.

End occupation of west bank and blockade of Gaza first

What has this got to do with the Israel - Lebanon sea border issue?