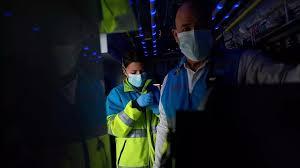 After months of turmoil and over 42,000 deaths, Spain appeared to see light at the end of the tunnel Friday, announcing ambitious plans to vaccinate much of the population by mid-2021.

"Our forecasts, under almost any reasonable scenario, show that a very substantial part of the Spanish population will be able to be vaccinated, with all guarantees, within the first half of the year," said Prime Minister Pedro Sanchez.

With the numbers gradually improving, suggesting Spain has passed the peak of the second wave, Sanchez said the government had finalized "a comprehensive vaccination plan" that would be presented at Tuesday's cabinet meeting.

The government, he said, had been working on the plan since September, making Spain the first within the European Union, alongside Germany, to fully map out such an immunization scheme.

"We are ready," he said, stressing that Spain had a "significant logistical network" to ensure supplies would be distributed to its population of 47 million people.

His words came as major pharmaceutical companies closed in on vaccines against the virus which has infected more than 55 million people and caused more than 1.3 million deaths worldwide, according to an AFP tally.

U.S. giant Pfizer and its German partner BioNTech have taken the lead alongside U.S. firm Moderna, with the EU saying it was hoping to have both vaccines approved for use by the year's end.

Last month, Health Minister Salvador Illa said the government had authorized the purchase of 31.5 million doses of a Covid-19 vaccine currently being developed by the University of Oxford and British pharmaceutical giant AstraZeneca.

The government is also awaiting the outcome of Pfizer/BioNTech's bid for U.S. regulatory approval for its vaccine after large-scale trial data showed it was around 95 percent effective against Covid-19.

Earlier this week, Spain's AEMPS medicines agency approved the country's first phase three trial for another Covid-19 vaccine, one of nine nations to take part in the process.

Spain has been badly hit by the pandemic, suffering more than 1.5 million confirmed infections -- the EU's second-highest number after France. The virus has also claimed 42,619 lives in Spain, the fourth highest toll after the UK, Italy and France.

IMF forecasters predict its economy will contract by 12.8 percent this year, which would make it the hardest-hit country of the world's advanced economies.

Although many restrictions remain in place, including a night curfew and limitations on inter-regional travel, Spain has managed to avoid a second lockdown as has been imposed in several other European nations.

And the measures appear to be working, with a decline in the 14-day incidence rate and the northeastern Catalonia region preparing for Monday's reopening of bars and restaurants that have been closed since October 16.

Although the pressure on accident and emergency services remains "significant", health professionals say it is far from the extremes of the first wave.

"Back then, it was awful, like wartime, but now it's not even close," Enrique Sánchez of Madrid's SUMMA ambulance services told AFP recently.

These days they tend to see milder cases of Covid-19 and unlike in the spring, "we are not short of protective material," he said.

"The situation is stable," agreed SUMMA spokesman Victor Escudero, saying the service was "not seeing as many critically ill patients in homes as there were in the first wave."