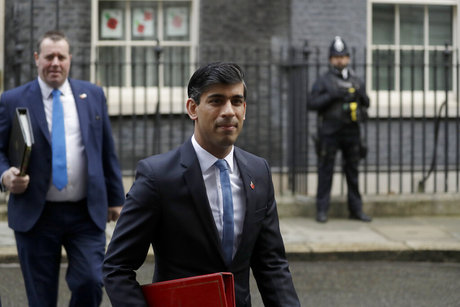 Britain's finance minister Rishi Sunak on Sunday warned that the British economy was under "enormous strain" because of the coronavirus, ahead of a government spending review next week

But he ruled out a return to austerity measures.

Economic forecasts to be released alongside his Wednesday spending review would show "the enormous strain and stress that our economy is experiencing", Sunak told Sky News.

The findings of independent forecasters the Office for Budget Responsibility  -- as well as the 750,000 job losses from coronavirus -- would have to be taken "in the round as we consider the best way to fight the virus", he said.

Despite the profound impact of the coronavirus on Sunak's spending review, he rejected a possible return to austerity measures on the economy.

Government spending would continue to increase on last year's day-to-day public spending, he said. "There's absolutely no way in which anyone can say that's austerity."

However, he refused to rule out a widely expected public-sector pay freeze.

It was fair to "think about what is happening with wages, with jobs, with hours, across the economy when we think about what the right thing to do in the public sector is", he said.

Britain has suffered more than any other country in Europe from the coronavirus, recording more than 54,000 deaths from 1.4 million cases.

In November Prime Minister Boris Johnson's government imposed a four-week lockdown to stop the spread of the disease. That is due to be partially lifted on December 2, giving some relief to businesses.

Sunak said the government was "looking at ways to see how families could spend time with each other over Christmas" but refused to pre-empt an announcement on the UK's winter virus strategy by Prime Minister Boris Johnson due Monday.

On Saturday, ahead of the spending review, Sunak's department unveiled a £3 billion ($3.9 billion, €3.4 billion)to support the National Health Service (NHS) in tackling the impact of coronavirus.

As part of the package, £1 billion  will be spent on addressing backlogs in the health service -– paying for up to one million extra checks, scans and additional operations for those who have had their treatment delayed since the start of the pandemic.

It would be enlightening to investigate the pathology of the 54,000 deaths as to contributing causes. China's Xinhuanet.com recently added the word "related" to its daily recitation of Johns Hopkins University's (Greg House's alma mater) COVID death toll. "Nationwide, more than 12.2 million cases have been recorded with more than 256,000 related deaths as of Sunday evening, according to the real-time count kept by Johns Hopkins University. Enditem" But today's Xinhuanet.com summary leaves the word out again. Generally your chances of dying of the disease if you catch it are about one in a thousand or two. Someone estimated the cost of the "pandemic", probably with the inflated death rate, at six million dollars per death.